Here are the 5 finalists for Santa Anita's Woolf jockey award 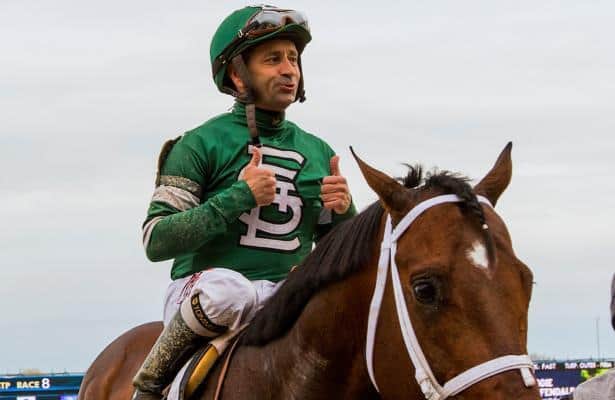 Santa Anita Park has announced five finalists for the 2022 George Woolf Memorial Jockey Award, with the winner to be announced in February. One of the most prestigious awards in American racing, the Woolf Award, which is determined by a vote of jockeys nationwide, can be won only once.

Presented annually by Santa Anita since 1950, the Woolf Award recognizes riders whose careers and personal character garner esteem for the individual and the sport of Thoroughbred racing. The trophy is a replica of the life-sized statue of legendary Hall of Fame jockey George Woolf that adorns Santa Anita’s Paddock Gardens area.

Regarded as one of the greatest big-money riders of his era, Woolf was a household word by virtue of winning the inaugural Santa Anita Handicap aboard Azucar on Feb. 23, 1935, and for his association with the immortal Seabiscuit, whom he rode to victory over Triple Crown Champion War Admiral in a 1 3/16-mil match race at Pimlico Race Course on Nov. 1, 1938.

Affectionately known as “The Iceman,” Woolf was revered by his fellow riders, members of the media and millions of racing fans across America as a fierce competitor and consummate professional.

In a move that had national implications, Joe Bravo, a dominant force in the Mid-Atlantic and in particular at Monmouth Park since the early 1990s, announced that he would be shifting his base of operations to Southern California on a full-time basis this past summer and hired locally based agent Matt Nakatani. Long known as “Jersey Joe,” Bravo caught on immediately at Del Mar, winning 21 races, three of them stakes, while finishing fifth in the track's Summer Meet standings.

A great judge of pace and conditions, Bravo, 50, won 13 riding titles at Monmouth and through Dec. 19, has 5,523 career victories dating back to his debut at age 17 in 1988. A third-generation rider, Bravo’s biggest career win came at Santa Anita aboard Blue Prize in the 2019 Breeders’ Cup Distaff.

Hard work has been the hallmark of Glenn Corbett’s career, which began in May 1985 at Penn National. Corbett, 55, was born in Georgia and soon after graduating high school, he set upon a career in racing that has seen him ride at 36 racetracks in 18 states while riding more than 1,000 races annually a total of four times. A mainstay at Prairie Meadows in Des Moines, Iowa, since its opening in 1989, he also has ridden at Turf Paradise in Phoenix, Ariz., since 1992. A member of the Prairie Meadows Hall of Fame, Corbett, who considered a career in Professional Rodeo while in high school, notched his 4,000th career win at Turf Paradise on March 8.

Roundly considered one of the top riders in the world, French native Julien Leparoux, a jockey's son who was born July 15, 1983, in Senlis, France, is a truly dominant force at Keeneland Racecourse. A leading rider at Keeneland 12 times, dating back to 2006, Leparoux ranks second by stakes wins with 66 and is Keeneland’s fourth all-time leading jockey, with 507 wins. At age 38, Leparoux has 2,840 wins through Dec. 19 and has amassed $179,307,259 in career earnings.

Born March 8, 1974 in Portland, Ind., Rodney Prescott is the Hoosier State’s all-time leading rider and once again ranked among the top 10 jockeys at the recently concluded Indiana Grand race meeting. After a stint as a groom after graduating high school, Prescott broke his maiden at age 20 at River Downs, near Cincinnati. A three-time leading rider at Indiana Grand (2004, 2005 and 2018), Prescott registered his 4,000th career winner there on Nov. 4.

A native of Lake Charles, La., Tim Thornton is very much a rider on the ascendency, evidenced by the fact he set a single-day record on Oct. 23 by winning seven races at Delta Downs. Formerly a regular at Chicago-area tracks, he broke his maiden on June 13, 2003 and registered his 2,000th career victory this past Feb. 16 at Delta Downs and notched his third consecutive Delta riding title in April. In 2018, he ranked second to Eclipse Award winner Irad Ortiz with 286 wins and was 40th nationally in purse money won, with $4.9 million.