Here are six more racing quirks from our oddest year 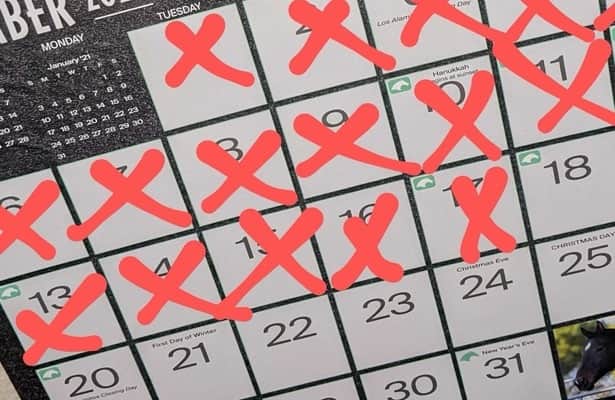 It is history’s villain, this year of 2020. From a pandemic to a disputed election, it is hard to believe that anyone escaped the inevitable swirl toward the proverbial drain.

Racing did not. While some tracks kept going without any interruption, others like Aqueduct, Belmont Park and Santa Anita had their schedules put on hold. Keeneland completely canceled its spring meet.

There were also tracks that seemed to thrive on the absence of competition for the gambling dollar, which is as good a place to start as any in this second of two parts to the racing stories that were “so 2020.”

It was not just racing fans. Sports fans in general gravitated to Grand Island, Neb., and Claremore, Okla. While they were sequestered in the early days of the pandemic, that is where they found live gambling on Mondays and Tuesdays. Handle at Fonner Park and Will Rogers Downs soared, although racing’s complicated business model for simulcasting kept them from holding more than a few cents on the dollar. The surest sign that the little tracks had woven themselves into the greater fabric of gambling came April 6, when a controversial decision by Fonner Park stewards roiled bettors who were invested in a $4.1 million Pick 5. Who knew so many experts on Nebraska racing rules were on Twitter?

Murphy’s Law found Kentucky Downs. The niche late-summer turf meet on the Kentucky-Tennessee border was fraught with oppressive heat and humidity and, of course, COVID complications. Then came the real trouble. On opening day the starting gate experienced premature ejection before all the horses were loaded for the fifth race. The next day the tractor pulling the gate broke down. The day after that it was realized that the remeasuring of track distances using the new Gmax timing system rendered all the old records moot, especially since five of them had already been broken. A power failure in the TV production truck forced a 34-minute delay before the Dueling Grounds Oaks. Finally, a horse was loaded into the wrong stall in the gate before a race, and no one corrected that before the start. At least the low takeout rate was not affected.

Del Mar abandoned electronic timing of turf races and went with old-fashioned stopwatches. Chart times were revised after the fact at Penn National. Fractions were absent for some of opening day at Tampa Bay Downs. Those were a few of the problems reported with the Gmax Race System that has been installed at a growing number of tracks. It relies on GPS technology, which, of course, has never failed anyone who wound up at the end of a dark cul-de-sac instead of the restaurant that was typed into the app. Developed by a British company in partnership with Equibase, Gmax is the first serious rival to tread on the high-tech domain of Trakus. Maybe it is just a case of the bugs getting worked out, but Gmax has already lost the Beyer Speed Figures team at the Daily Racing Form. Instead the races are independently timed using – wait for it – a proprietary computer program. What could go wrong?

There was no more glaring case of bad timing than in the Breeders’ Cup Classic. Trouble was clearly brewing when the NBC telecast showed that Authentic ran the first quarter-mile in 17.19 seconds, apparently breaking the record held by an unnamed Greek centaur in the fifth century B.C. Alas, it was not true. Long after the sun had set at Keeneland, a track-record final time of 1:59.19 was announced. Apparently, that was also wrong. The following week Equibase revised it to 1:59.60, which was still a track record. Even then the final time registered right away by Trakus was 1:59.82. A formal airing of the arguments about which time was right was called off by the Commission on Presidential Debates.

No, not Justify. Not Hoppertunity. They were 2 1/2 years ago. This time it was Aidan O’Brien. It happened a week before his crew created a case of mistaken identity by putting the wrong jockeys and wrong saddle cloths on two horses at Newmarket in England. This time O’Brien and his sons – second-generation trainers Joseph and Donnacha – had to scratch the 11 horses they shipped to Prix de l’Arc de Triomphe weekend in Paris. They all tested positive for a drug that is normally used to beef up beef cattle – especially, as European media gleefully pointed out, here in America. The O’Briens pointed fingers of blame at tainted feed that was bought from an Irish company that promised a robust investigation.

Nothing screamed 2020 absurdity more than what happened on Baldwin Avenue in Arcadia, Calif., from March 27 to May 14. On the west side of the street the Los Angeles County Arboretum and Botanic Garden stayed open from 9 a.m. to 5 p.m. every day. On the east side of the street Santa Anita was shut down. Even though the track was already off limits to spectators, the Los Angeles County Department of Public Health said it was to prevent the spread of COVID – as if the virus knew to stay away from the hundreds of people at the Arboretum. Speculation was that the pandemic was just an excuse for animal-rights sympathizers in county government to stick it to horse racing. Eventually, The Stronach Group, led by racing boss Aidan Butler, convinced L.A. County that the same people caring for the horses in the morning should be allowed to run them in the afternoon. But not before seven weeks of races and the revenue they generate were lost.

Until someone starts taking bets on races between the egrets and herons at the Arboretum, here is hoping things get back to some semblance of normal in 2021. Even a goofy normal would be an improvement.