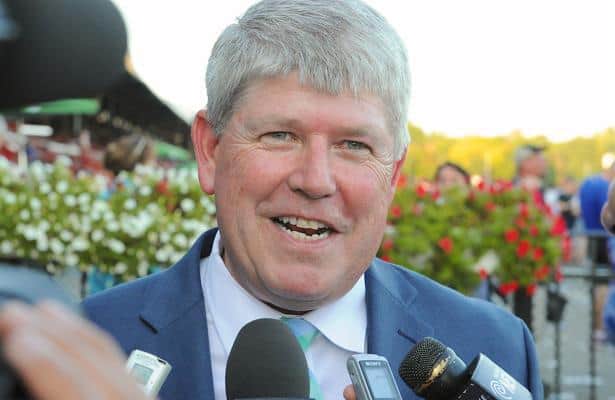 On the surface, with each of her last three races as a 2-year-old rained off the grass, it would appear Courtlandt Farm’s Hollywood Glory was a victim of unfortunate timing. For trainer Mark Hennig, it was more a case of careful planning.

Second in back-to-back stakes to cap her juvenile campaign, the last coming over Thanksgiving weekend, Hollywood Glory is set to make her sophomore debut Saturday in the Grade 3, $150,000 Forward Gal at Gulfstream Park.

A dark bay or brown daughter of Maclean’s Music, who sired 2017 Preakness (G1) winner Cloud Computing in his first crop, Hollywood Glory will be cutting back to a sprint after three consecutive starts at one mile, each of which was forced by weather to the main track.

Hollywood Glory broke her maiden second time out Sept. 29 at Belmont Park, returning four weeks later to be second by 3 ½ lengths in the Chelsey Flower Stakes, contested over a sloppy, sealed track. She dueled for the lead in the Tepin Stakes Nov. 25 before finishing second, beaten five lengths, on the muddy surface.

“We kind of entered her on the turf on purpose because we were dealing with all that weather in New York. All those races, it was pretty evident that they might come off,” Hennig said. ““She ran well in both her stakes races.

“The last one, she kind of inherited the lead which is not what she wants to do,” he added. “That was kind of the reason for backing up going seven-eighths to start the year off, because I think she’ll get outrun a little bit early and she runs better when she’s got a target to run at.”

Jockey Jose Ortiz will ride Hollywood Glory for the first time from Post 8 in the field of nine at 116 pounds. She has tuned up for her graded-stakes debut with six works over Gulfstream’s main track since mid-December.

“She’s done very well with the time between races. She’s trained aggressively here, anything you want to do. Most of the time we’re trying to slow her down,” Hennig said. “She’s really transitioned well to South Florida. This race is one of those where I would have liked it to come up sooner but we had to keep waiting it out. She’s done well. I entered her in an [allowance race] that didn’t go, so this is where we landed. She’s been working super.

“We’re just going to let her tell us where to take her,” he added. “Some horses change from 2 to 3 and go on and some of them stay in their 2-year-old mindset, so we’ll just see what happens.”

Monarch Stables, Inc.’s Bye Bye J will continue her progression for trainer Ron Spatz in the Forward Gal. The Arkansas-bred daughter of 2012 Canadian Horse of the Year Uncaptured broke her maiden going 4 ½ furlongs last April at Gulfstream, then went seven months between races before rallying to be third in a five-furlong optional claiming allowance on the grass at Gulfstream Park West.

Back on the dirt for her most recent start, Bye Bye J sat just off pacesetter Iva before swinging past at the top of the stretch and drawing clear for a two-length victory in the six-furlong House Party Stakes Dec. 8 at Gulfstream.

“The race that really amazed me was when I used that five-eighths race at [GPW] as a prep and she didn’t like it. She broke good, dropped back to last and was last turning for home, and she made a little run on the outside to be third,” Spatz said. “I really didn’t think that was going to happen, but it worked. She came off that race and did real well.

“She’s been doing great,” he added. “She’s training really super. Every work’s been faster than I want it to be, but she’s doing it on her own. She usually just sits back a little bit. You kind of have to get after her to motivate her and then she digs in. She’s a grinder, with a little speed. She’ll be going up against some nice fillies but hopefully she runs well and can get a piece of it.”

Hall of Famer John Velazquez has the call on Bye Bye J from Post 7 at co-topweight of 120 pounds.

Another stakes winner in the field is Denlea Park, Ltd. And Kent Spellman’s Fashion Faux Pas, who captured the six-furlong Sandpiper Stakes Dec. 15 at Tampa Bay Downs in her 2-year-old finale. She made her first two starts at Laurel Park for trainer Arnaud Delacour, the second a front-running 5 ¾-length romp Nov. 23. Hall of Famer Javier Castellano rides from Post 3.

Also entered are Champagne Anyone, a two-time winner that was fourth in the Golden Rod (G2) Nov. 24 for trainer Ian Wilkes; Feedback, starting for the first time since beating Hollywood Glory in a maiden triumph last August at Saratoga; Frond, also making her stakes debut off one maiden win; and Horologist, Brunette Princess and Jeltrin, who ran second, third and fourth, respectively, in the six-furlong Glitter Woman Jan. 5 at Gulfstream.