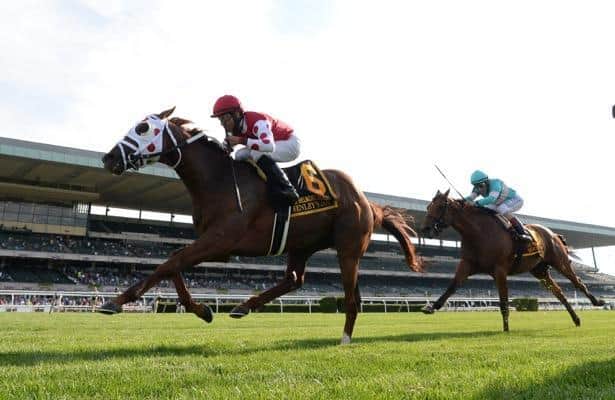 Bloom Racing Stable's Henley's Joy kicked off the Turf Trinity with a rousing score in the Grade 1, $1 million Belmont Derby Invitational on Saturday at Belmont Park.

Trained by Mike Maker for Bloom Racing Stable, Henley's Joy rated in third position in the 10-furlong test on the inner turf and showed good acceleration down the lane under leading rider Jose Lezcano to secure the three-quarter length win.

Henley's Joy, a chestnut son of Kitten's Joy, was in good order on Sunday morning.

"He came back great," said Nolan Ramsey, assistant to Maker and grandson of Henley's Joy's breeders Ken and Sarah Ramsey. "We had the flowers sitting over the fence in front of the barn this morning and we had a few people stop to take pictures of him. He would prick his ears and swoll up and posed for the camera. He'd doing well, no complaints, and we're looking forward to bringing him up to Saratoga."

"We're really excited about this series," said Ramsey. "We think he's really going to like the mile and three-sixteenths of the Saratoga Derby. It's a great idea and I think it really showcases the marathon turf horses, which is something I think American racing could really use. It's nice to be a part of it and have a serious contender."

With four wins and three seconds from 11 starts, Henley's Joy had endured tough trips when second in the Transylvania (G3) and eighth in the American Turf (G3) when bothered at the start. Saturday, with Lezcano up for the first time, Henley's Joy enjoyed a perfect trip.

"I hate to make excuses for horses. It's easy to do in this game, but when you watch his replays it's hard not to make an excuse," said Ramsey. "We knew the horse had the talent - but things never really went his way with a clean trip to showcase what he has - he got one yesterday and he delivered."

Henley's Joy boasted stakes wins last year in the Kentucky Downs Juvenile and the Pulpit at Keeneland and registered a 97 Beyer Speed Figure while making the grade.

Maker also sent out Do Share to a sixth-place finish for owner Three Diamonds Farm in the $300,000 John A. Nerud (G2), a "Win and You're In" qualifier for the Breeders' Cup Sprint on the Stars & Stripes Racing Festival undercard.

The 6-year-old Candy Ride bay was cross-entered in Friday's $100,000 Iowa Sprint Handicap won by D'Rapper at Prairie Meadows, before the team decided to try deeper waters at Belmont.

"He came out of the race just fine," said Ramsey. "We had some complications with shipping. We were originally scheduled to go to Iowa and changed our minds late, which, in hindsight, may not have been the right call as that race scratched down to a three-horse field. He ran his race. He's not the type of horse you can put into the race, but the way the track has been playing you had to be into the race to get anything and that's not the type of horse he is. The way they ran the race wasn't fitting for him. We'll re-group."

The Maker barn will send out Dunph in the $100,000 Quick Call (G3) for sophomore turf sprinters on Thursday, Opening Day, at Saratoga Race Course.

The 5 ½-furlong Quick Call on the Mellon turf will join the $150,000 Schuylerville (G3) in kicking off the graded stakes action for the 40-day Saratoga meet, which will run from July 11 to Sept. 2 with racing being conducted five days a week, Wednesday-Sunday, except for a special Labor Day Monday card to close out the meet.

Owned by Three Diamonds Farm and Joseph Besecker, Dunph won his first two starts, both on dirt, including the seven-furlong Spendthrift Juvenile Stallion at Churchill Downs. The Temple City gelding tried routing with off-the-board efforts in the Risen Star (G2) at Fair Grounds and the Tampa Bay Derby (G2), before trying turf when eighth in the Transylvania (G3).

Last out, Dunph finished third in the grassy one-mile Mystic Lake Derby at Canterbury. Ramsey said he is hopeful a turnback in distance will energize the Kentucky-bred.

"I do think turf is his preferred surface and I'm excited to see him sprint on the turf," said Ramsey. "Obviously, no stakes at Saratoga is easy, so we'll definitely have our work cut out for us but it will be interesting to see how he handles the turf sprint. There's talent there we just haven't been able to figure out how to maintain it, hopefully this will be the answer."