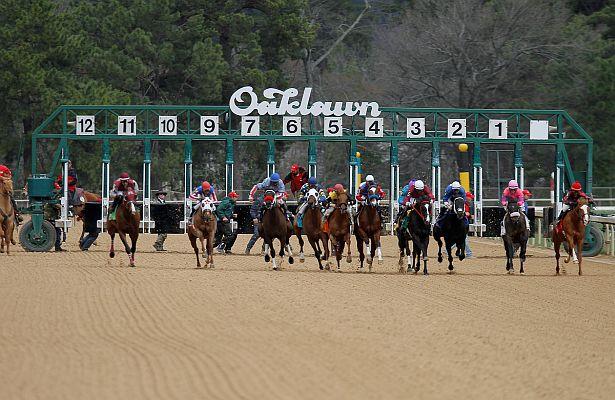 Multiple stakes winner Hebbronville didn’t just record a bullet workout Wednesday morning at Oaklawn. It was maybe among the fastest works from the gate at Oaklawn that any of the clockers could remember.

Hebbronville blitzed 6 furlongs in 1:11.60 over a fast-rated surface for trainer Lynn Whiting, who is pointing the 4-year-old Majesticperfection colt for the $100,000 King Cotton Stakes for older sprinters Jan. 30 at Oaklawn.

“I don’t know that I’ve ever had a horse work any better than him,” said Whiting, a trainer for approximately 50 years. “I was wondering about Lil E. Tee.”

Whiting recalls breezing Lil E. Tee once at Oaklawn when some horses broke from the gate in front of him.

“They were probably a sixteenth of a mile ahead of him and he started chasing them,” Whiting said. “Turning for home, he just about caught up. He was going through them like the running back through the hole. He was flying.”

There was another horse in the gate with Hebbronville Wednesday, but Hebbronville was two or three lengths in front seconds after breaking. Whiting said Chris Landeros, tied for second in the Oaklawn standings, was aboard for the breeze and will have the mount in the 6-furlong King Cotton.

Hebbronville races in blinkers, but didn’t wear the equipment Wednesday. That’s not unusual, the trainer said.

Whiting said Hebbronville will wear blinkers in the King Cotton.

Hebbronville won 4 of 10 starts last year, including the $100,000 Jersey Shore Stakes (G3) at Monmouth Park and $100,000 Perryville Stakes at Keeneland. The King Cotton will be Hebbronville’s first start since finishing third in the $200,000 Steel Valley Sprint StakesNov. 23 at Mahoning Valley.

Hebbronville made his first three starts last year at Oaklawn, finishing third in the $100,000 Gazebo Stakes and $100,000 Bachelor Stakes.

Following the King Cotton, Hebbronville is expected to be pointed for the $100,000 Hot Springs Stakes March 5 and $400,000 Count Fleet Sprint Handicap (G3) April 10. Both 6-furlong races are at Oaklawn.