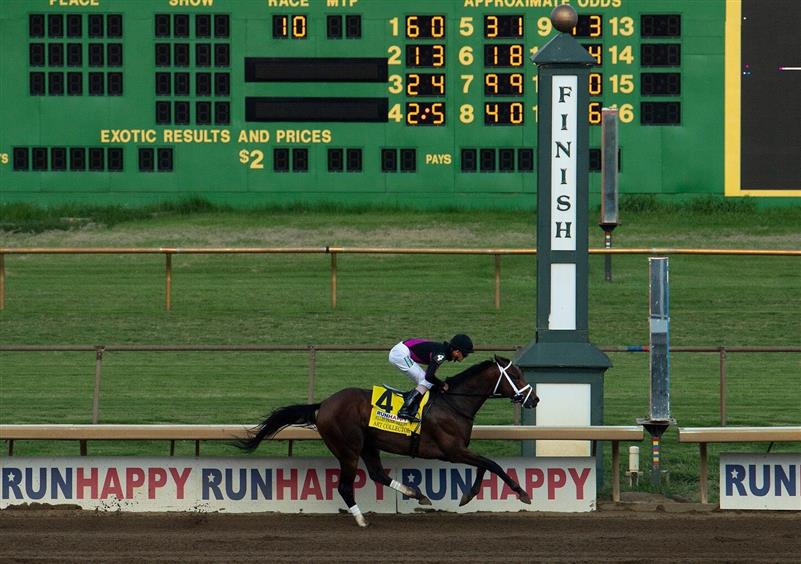 Bruce Lunsford's homebred Art Collector ran to his odds-on favoritism when making short work of the field in Sunday's $200,000 Ellis Park Derby at Ellis Park, a point-paying prep for the Sept. 5 Kentucky Derby.

Art Collector and jockey Brian Hernandez Jr. seized the lead shortly after leaving the gate and shook off a bid from Attachment Rate leaving the second turn before drawing off in the stretch to earn an additional 50 points towards the Kentucky Derby. Attachment Rate was a clear-cut second to earn 20 points, giving him 35 overall to rank 18th on the Kentucky Derby leaderboard.

The third- and fourth-place finishers -- Necker Island (10 points) and Rowdy Yates (5) will each fall well short of reaching the Kentucky Derby starting gate. The big disappointments in the race were second-choice Shared Sense and Dean Martini. Each failed to tally qualifying points and remain ranked just outside the Kentucky Derby top 20 with just next week's Pegasus Stakes at Monmouth Park remaining on the prep schedule.

Winning trainer Thomas Drury Jr., who will saddle his first horse in the Kentucky Derby if all goes as planned with Art Collector, was not lost in the moment on Sunday.

“I walk out of the paddock and you’re 1-9 in the biggest race in the history of Ellis, at least to my knowledge," Drury Jr. said. "I’m surprised that my legs are still holding up underneath me. It’s a big day for us. We got what we were looking for.

Art Collector carved fractions of :23.33, :46.74 and 1:10.70 for three-quarter miles in the 1 1/8-miles Ellis Park Derby while being stalked by a group of horses, which included Dean Martini among those prominent. Art Collector continued on the lead through the far turn, but making a bid on the outside was Attachment Rate for trainer Dale Romans. While Attachment Rate took his best shot at Art Collector, the Blue Grass (G2) winner quickly shook off that rival and opened up in the stretch to win going away by 3 1/4 lengths.

“Our horse broke sharp and I put him in the race," Hernandez Jr. said. "He was going quick enough, but at some point I knew I’d be able to give him a breather. He was able to take a breather going into the second turn. And once he did that, I was pretty confident in him.

"From the stretch home he was in himself and cruising along," Hernandez Jr. continued. "He seemed to enjoy himself. He went the mile and an eighth impressively today and we’re looking on to the next one.”

Following the win, the experience Drury Jr. remained hesitant to utter the words "Kentucky Derby," knowing full well a month can be an eternity in horse racing.

“Not yet. We need to make sure he’s ok tomorrow, but I’m getting closer," Drury Jr. said. "This has just been a, I can’t find the words for it, a dream come true. My daughter was here today and able to share it with me. This has been a lot of years of hard work, long days and tough beats. Today is why you keep coming back, that’s why you do it to get an opportunity like this and I’m just glad we were able to make the most of it.”

By Bernardini out of the Distorted Humor mare Distorted Legacy, Art Collector has won five straight starts and is 4-for-4 while under the care of Drury Jr. Prior to his win in the July 11 Blue Grass at Keeneland, Art Collector rattled off three straight allowance wins at Churchill Downs.

“This is huge," said Hernandez, whose has finished off the board on two previous Kentucky Derby mounts: Tom's Ready in 2016 (12th) and McCraken in 2017 (8th). "We’re going into the Derby now with a legitimate horse. Like we said after the Blue Grass, he’s proven he’s getting better and better with each race. He showed it again today. He put everyone away."

As for Drury, he is well aware the emotions and pressure will only ramp up from here.

“You know, I was staring at the ceiling at 2 o’clock this morning for the Ellis Derby, so I can only imagine," Drury said. "It’s fun though. It’s not so much that you’re nervous. I have faith in my ability. We know exactly where our horse was at. Everything that we’ve wanted him to do, he’s done. We’re going into the race exactly the way we want to go into it.

"But just to be in this situation and to get this kind of an opportunity and to have Bruce (Lunsford) leave the horse with me," Drury added. "What do you say? The guy has given me the chance of a lifetime here.”