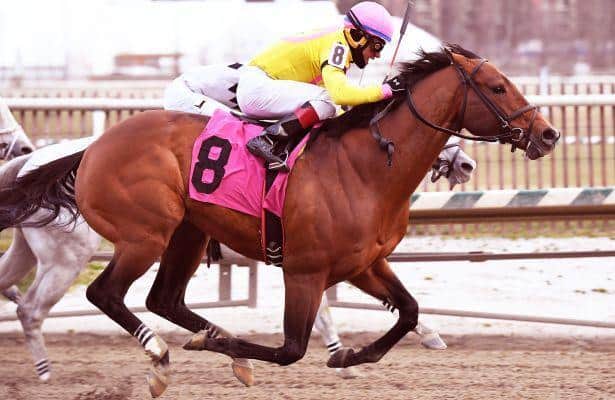 A year after being beaten as the favorite in the $100,000 Dave’s Friend, Heaven’s Runway made a triumphant return to Maryland by wearing down top choice Chief Lion through the stretch and edging past for a half-length victory Saturday at Laurel Park.

The Dave’s Friend for 3-year-olds and up at six furlongs anchored five stakes worth $475,000 on the New Year’s Eve program that closed Laurel’s 52-day fall meet. Other stakes for 3-year-olds and up were the $100,000 Thirty Eight Go Go for fillies and mares and $75,000 Jennings for Maryland-bred/sired horses, both at one mile.

Jockey Cornelio Velasquez had Heaven’s Runway ($7) in a stalking position in third on the outside as even-money favorite Chief Lion ran the opening quarter-mile in 23 seconds. Heaven’s Runway moved to second after a half in 45.83 and still trailed by 1 ½ lengths straightening for home.

As he did in his previous start, rallying for a neck victory over Stallwalkin’ Dude in the Fall Highweight (G3) Nov. 24 at Aqueduct, Heaven’s Runway steadily gained ground down the stretch and was resolute late to win in 1:09.74 for six furlongs over a fast main track.

“My horse keeps improving and every time he is much better. I think three-quarters is a good distance for him. I think he’s tough in there,” Velasquez said. “Today he broke good and had good position and at the three-eighths pole I start to put pressure on the horse in front. He ran a big race.”

Heaven’s Runway won for the second time in three starts since being claimed for $62,500 by trainer Rudy Rodriguez on behalf of owner Michael Dubb Aug. 28 at Saratoga. Chief Lion, like Stallwalkin’ Dude trained by David Jacobson, held second by a length over 22-1 long shot Sir Rockport.

It was another nose back to Chublicious in fourth, followed by Measured and Bodhisattva.

Trained by Linda Rice for owner Martin Schwartz and reunited with jockey Horacio Karamanos, aboard for back-to-back victories at Laurel in the spring, High Ridge Road ($6) ran one mile in 1:35.58 for her fourth career win and third in as many starts in Maryland.

Little Cyclone, sent off at 50-1, was eager on the front end running a quarter-mile in 23.71 seconds and a half in 46.76, with Ansible in second and Grade 1 winner By the Moon in the clear in third racing three wide.

By the Moon eased up to the lead after six furlongs in 1:10.95 closely followed by High Ridge Road, who circled four wide to engage the favorite. The top two battled through the final quarter mile before High Ridge Road edged clear, with Ansible a distant third.

“My filly broke good out of the gate and I tried not to be so far behind [By the Moon], because that filly can run,” Karamanos said. “At the top of the stretch my filly gave me a nice kick and we went head-to-head to the last sixteenth. My filly, she tries and when she kicks she gives you a nice kick.”

John Jones Returns a Winner in $75,000 Jennings: Back at home after having his four-race win streak snapped in South Florida, Matt Schera’s John Jones led from start to finish and cruised to a five-length victory in the $75,000 Jennings.

Favored at 1-2 in a field of six, John Jones ($3) won for the fifth time at Laurel and third in a stakes since being claimed for $25,000 in mid-July by trainer Lacey Gaudet. With regular rider Luis Garcia aboard, the 4-year-old gelding ran a mile in 1:36.34.

“I got out easy and I knew that someone would come after me, so that I didn’t not have an easy lead all the way around,” Garcia said. “I did not have any trouble in the race. This horse tries hard every time and I was confident that we would do well today.”

John Jones broke sharp and coasted to the front, running the opening quarter-mile in 25.05 seconds flanked by Ravenheart on the rail and Final Prospect to his right. John Jones began to separate from his rivals after a half in 48.65 as Kaitain swept into second on the far outside ahead of Just Jack on the inside.

Rockinn On Bye closed late to edge Kaitain by a head for second with Final Prospect fourth. Just Jack fell in mid-stretch and unseated jockey Alex Cintron, who was up and walking after the race but replaced on his final two mounts.

The Jennings was the first race for John Jones since finishing a strong third, beaten two lengths, in the Claiming Crown Jewel Dec. 3 at Gulfstream Park. He is now 7-for-12 lifetime at Laurel and six-for-eight in his career at the mile distance.

“This horse is one of the easiest horses to care for in my barn,” Gaudet said. “He tries hard every time and you can’t fault him for that Florida race because he gave it his all. We wanted to race here one more time to end our year and this seemed to be the perfect spot for him.”