Heat wave results in number of track cancellations for Saturday 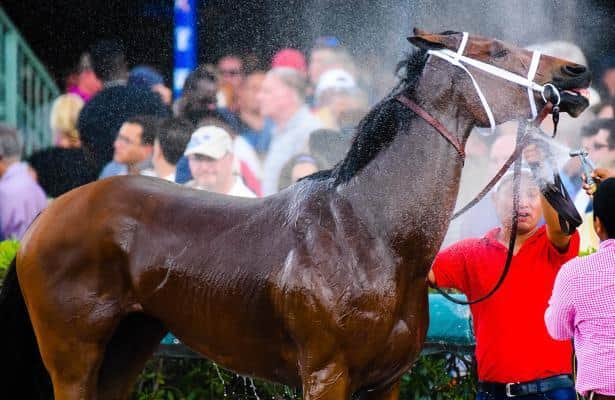 With a forecast calling for heat in the mid-to-high 90s along the Eastern Seabord, a number of racetracks have moved to cancel their Saturday cards, including Saratoga, where New York Racing Association officials called it a "sensible decision" not to run.

Many of those locations are under an Excessive Heat Watch from the National Weather Service.

“With the forecast calling for extreme temperatures and high humidity this weekend, we have decided to cancel our live programs both Saturday and Sunday,” said Maryland Jockey Club President and General Manager Sal Sinatra. “The health and safety of our horses and jockeys is are highest priority.”

Delaware Park canceled "acting upon the recommendation of the chief commission veterinarian of the Delaware Thoroughbred Racing Commission." The Saturday card will be made up Oct. 3.

Finger Lakes will be forced to reschedule, among other races, the New York Derby, which state-bred Not That Brady was using as a potential audition for the Aug. 24 Travers Stakes (G1).

Meanwhile, the show is expected to go on at Monmouth Park, which hosts the Haskell Invitational (G1) on Saturday. A number of safety protocols regarding the heat will be in effect, and there's a possibility races could be delayed until temperatures dip.

Ellis Park hasn't yet made a decision about its Saturday card.

“The forecast is heat index looking up to upwards of 110 degrees,” said racing secretary Dan Bork. “Consulting with our state veterinarians and other officials, we just thought it would be in the best interests of everybody to not go ahead and run tomorrow (Friday). Then we’ll look ahead to Saturday and go on a day-by-day type of thing. It’s just safer for everybody — for horses, for jockeys, for the fans. It’s going to be an extreme day. Any time that number gets to 105 and above, we start taking a really close look.
“We did want to make this decision early. We could have waited until tomorrow but we decided to do it today. There are a lot of people who come (from out of town) whether it be horses or fans. We wanted to let them know early. Of course we will open for simulcasting and the historical horse racing room for gaming.”