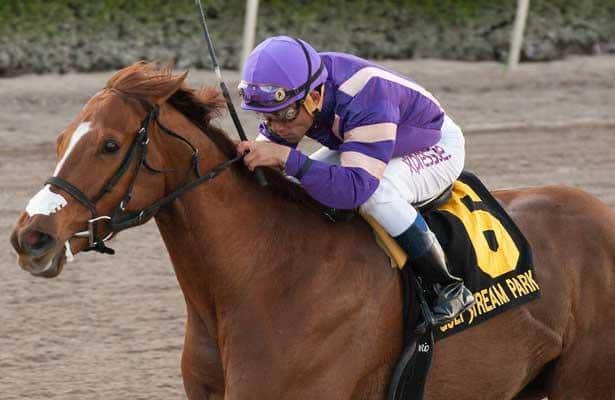 Peachtree Stable's Heart Stealer was back on her best game in Saturday's featured $200,000 Inside Information Stakes (G2) at Gulfstream Park and led home a one-two finish for the Marty Wolfson barn in the process.

After breaking alertly from post six under jockey Joel Rosario, the 4-year-old filly settled in third as Five Star Momma cut out the early fraction. Heart Stealer ($11.80) was three wide throughout, but traveled strongly and pulled away late to score by two lengths. The final time was 1:22.57 for the seven-furlong distance. Stablemate My Pal Chrisy rallied to complete the Wolfson exacta, while Five Star Momma stayed on gamely for third.

“I had a perfect trip," Rosario commented. "It went exactly like Marty said. I was going to be laying probably third behind the speed and she did everything right. They were going good up front. I don’t know how fast they were going, but my horse was always there for me and I’m glad we got the money.”

The daughter of Speightstown earned her first major victory at Gulfstream on Dec. 14, when she rallied to take the Sugar Swirl Stakes (G3), but never fired when pitted against champion Groupie Doll on Feb. 9 in the Hurricane Bertie Stakes (G3). Wolfson opted to throw out that effort and Heart Stealer vindicated that decision.

"I really like this filly," Wolfson said. "I think she just wasn't right in her last race. Since that race, she's been like she was before the Sugar Swirl. I really thought she would beat Groupie Doll that day--that's how good I thought she was. She just wasn't herself. Joel gave her a perfect ride. I told him to just throw out her last race, because she's the best of all the fillies I have. Her last race baffled me. My Pal Chrisy finished up really well, too."

The Inside Information was the fourth victory from 12 starts for Heart Stealer, who was now bankrolled $267,180. The Kentucky-bred chestnut started her career for trainer Dale Romans before joining the Bob Baffert string in California. She was transferred to Wolfson last fall and has won three of five outings since October.

The Wolfson-trained Centrique was the 7-5 favorite in the Inside Information, but endured an issue with her saddle and never fired in the race itself. She finished a non-threatening fifth, and Wolfson indicated she would likely be freshened up.

"Centrique just didn't break," Wolfson said. "I think with the trip and everything, I think she might be knocked out a little bit."