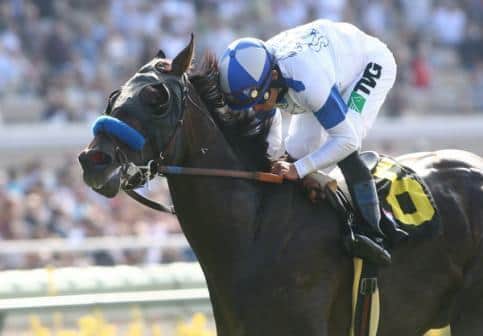 The Craig Family Trust's brilliant Twirling Candy, sent postward the prohibitive 1-5 favorite on the basis of his perfect three-for-three racing record, came through as expected Sunday in the $300,000 Del Mar Derby  but only after a stewards' inquiry pertaining to an incident leaving the clubhouse turn of the mile and one-eighth grass race.

Seemingly on cruise control while on an easy lead for jockey Joel Rosario, Twirling Candy bore out badly entering the backstretch, interfering with and carrying out 12-1 longshot Summer Movie, piloted by Victor Espinoza.

Rosario was able to regain control of Twirling Candy who quickly asserted himself to continue on the lead. The talented son of Candy Ride led the way into the final straightaway and pulled away impressively to win by 3 1/4 lengths. His final time of 1:46.96 included a final furlong in a blazing :11.29 seconds.

Jairzihno, a 33-1 outsider under Patrick Valenzuela, was second, a half-length in front of Royal F J, with Fantastic Pick fourth in the field of six three-year-olds.

After viewing videotape of the incident involving the winner and Summer Movie, the stewards ruled that the original result would stand.

In supporting features Sunday, Zayat Stables' Moon de French and jockey Martin Garcia led from start to finish to win the $79,475 Adoration Stakes, while Rosario picked up his second added-money success of the afternoon aboard a 9-10 favorite, highly-regarded Switch,  in the $100,000 Torrey Pines Stakes for three-year-old fillies.

Moon de French won by almost two lengths over Dance to My Tune, with Silver Swallow third in a field of seven older fillies and mares. Moon de French paid $14 after running the mile on the main track in 1:36.38.

Switch was a convincing 3 1/4-length victress in the Torrey Pines, as Hard Way Ten was second and Ellafitz third. Switch, also trained by Sadler, stepped the mile on the main track in 1:36.25 and returned $3.80.

Rosario won his third race of the day on Silent Soul in the ninth to move back into a tie with archrival Rafael Bejarano, who doubled, for the top spot in the jockey standings at 51 victories each with two days remaining of the 2010 meeting. Racing will be conducted Monday, Labor Day, with the first race at 2 p.m. The season will conclude Wednesday.