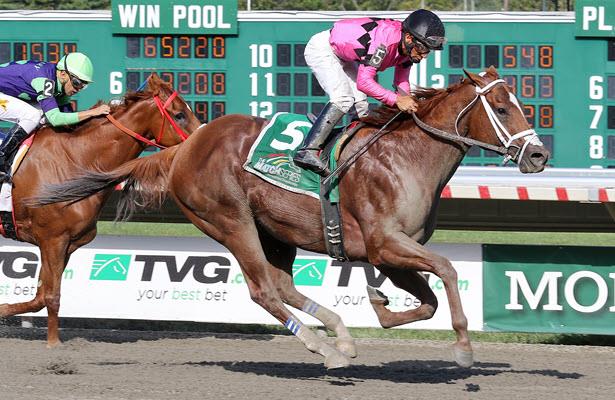 Despite what are sure to be long odds of winning, Lasting Legacy will be entered in the $2 million Breeders’ Cup Sprint in hopes of getting a second career stakes victory, according to new owner David Bernsen.

Lasting Legacy was claimed by Bernsen for $80,000 out of a fourth-place finish in an allowance/optional claiming race at Keeneland on Oct. 9.

Bernsen, who owns the horse in partnership with Jeff Lambert, said he had been tracking Lasting Legacy since earlier this year when the 6-year-old was caught up in the horse-doping scandal of former trainer Jason Servis and then unable to race due to COVID-19. Bernsen noted Lasting Legacy was claimed specifically as a Breeders' Cup horse.

Lasting Legacy is now under the care of trainer Bob Hess Jr. after previously being with Bret Calhoun. Bernsen said Lasting Legacy has responded well to the new surroundings.

“Great to be honest with you,” Bernsen said. “[He] was a pretty fresh horse. Bret Calhoun, who we claimed him off of...he’s a really good horseman.”

Bernsen noted the break is a key to success for Lasting Legacy, who has struggled with that facet of racing throughout his career. He added Lasting Legacy has seemed to improve in that area.

“I just don’t know in the Breeders’ Cup if you’re going to be able to run them down if you break last,” Bernsen said. “You’re completely out of it. But if he breaks right I think he’ll definitely be right there.”

The Sprint field is still developing, but could include some stiff competition for Lasting Legacy, including Vekoma, who is coming off a win in the Met Mile (G1), and Diamond Oops, who most recently won the Phoenix (G2) at Keeneland on Oct. 2.

“He broke bad,” Bernsen said. “But he almost ran down Diamond Oops in the race and I think Diamond Oops has a really great chance this year.”

Lasting Legacy is a full horse by Tapizar out of Sweet Tune, by Woodman. He has a record of 13: 5-3-0 with his lone stakes win coming in last year's listed Mr. Prospector Stakes at Monmouth Park.

Brian Hernandez Jr. will ride Lasting Legacy in the Sprint, replacing Paco Lopez, who Bernsen said will not be coming to the Breeders’ Cup.

Bernsen’s only other stake in a possible Breeders’ Cup runner is Kalypso, trained by Bob Baffert, who runs Sunday at Santa Anita in the Anoakia Stakes. Bernsen said the 2-year-old should be running two turns, but if she wins the 5 1/2 furlong race, they will consider running her in the Juveniles Fillies, going 1 1/16 miles.

“We would expect her to improve considerably going two turns,” Bernsen said.

The Breeders’ Cup is scheduled for Nov. 6-7 at Keeneland.