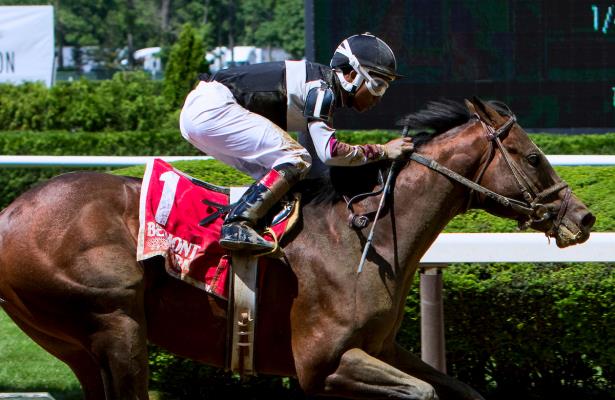 There’s a lot to like about He Hate Me in Saturday’s $100,000 Big Drama at Gulfstream Park, but there is one knock against Sagamore Farm LLC’s homebred.

The son of Algorithms is a graded stakes-placed stakes winner who has demonstrated ultra-consistency, having finished in the money in 13 of 16 career starts, but the 5-year-old has gone winless in his last six starts.

The Stanley Hough-trained gelding last visited a winner’s circle at Saratoga last July following a 2 1/2-length allowance victory. His six-race winless streak began three weeks later at Saratoga with a close-up second in the Tale of the Cat Stakes, which was followed by a third-place finish in the Frank J De Francis Memorial Dash (G3) at Laurel in September. He went on to finish third in the Sunshine Millions Sprint Preview at Gulfstream West, fourth in the Sunshine Millions Sprint at Gulfstream and second in the Pelican Stakes at Tampa Bay. In his most recent start, He Hate Me finished third in the seven-furlong Sir Shackleton on the Florida Derby (G1) undercard at Gulfstream.

“He’s doing fine. He’s a pretty steady horse. He kind of gives you what he can,” Hough said. “This is a Florida-bred race, which I’m not sure if that will make any difference. Going seven-eighths he kind of hung a little bit on us last time, but he was in good position and he ran a good race.”

He Hate Me launched his career in 2017 with a debut victory at Pimlico and a stakes score in the Tremont at Belmont before going to the sidelines for six months.

“He’s one of those horses that just gives you what he’s got most times. He had a knee operation when he was younger. He won his first couple races and looked like he could be anything and then unfortunately he had a chip in his knee and then later he had to have it re-operated on,” Hough said. “Now he’s fine with that and as he gets older, he takes pretty good care of himself, I’m sure he’ll run OK; it’s just a question if somebody else runs a little better.”

Luis Saez has the mount on He Hate Me, who scored in an optional claiming allowance at Gulfstream during the 2018-2019 Championship Meet.

Equine Authority Inc.’s Red Crescent returns from a 3 1/2-month layoff in the Big Drama, cutting back to seven furlongs for the first time since capturing an optional claiming allowance by 6 1/2 lengths last fall at Gulfstream Park West.

“He’s fresh, that’s why I’m running him back at seven-eighths. Let’s see if he can repeat it,” trainer John Vinson said. “He’s working well.”

“He just got better and better, matured. He’s been running good,” Vinson said. “We freshened him up for this race.”

A problem with a glue-on shoe had somewhat compromised his training for the Sunshine Millions Classic.

“It was up in the air to the last minute whether we were going to run,” Vinson said. “He missed a little bit of training, but he still ran big.”

Nik Juarez has the mount.

Harold Queen’s Noble Drama, who defeated Red Crescent in the Sunshine Millions Classic, will attempt to make amends Saturday for a subsequent subpar performance in the March 7 Challenger (G3) at Tampa Bay Downs.

Paco Lopez has the call aboard Noble Drama, a multiple-stakes winner with more than $400,000 in earnings.

Klaravich Stables Inc.’s Network Effect, a multiple graded stakes-placed son of Mark Valeski, is scheduled to make his first start in a race restricted to Florida-breds in the Big Drama. The Chad Brown-trained 4-year-old is coming off a second-place finish in an optional claiming allowance at Gulfstream, beaten by a half-length after clipping heels with an opponent shortly after the start.

Network Effect finished second in both the Nashua (G3) and Remsen (G2) at Aqueduct after capturing his debut at Saratoga in 2018. His 3-year-old campaign was limited to two races, an optional claiming allowance score off an 11-month layoff and an eighth-place finish in the Dec. 7 Cigar Mile (G1) at Aqueduct.

Network Effect, who will race at seven furlongs for the first time since breaking his maiden, will be ridden by Irad Ortiz Jr.

Imaginary Stable and Glenn K. Ellis’ Royal Squeeze is scheduled to make a quick turnaround in the Big Drama after coming off a three-month layoff to finish third in an April 17 optional claiming allowance at Gulfstream.

The 8-year-old gelded son of Wildcat Heir, who had previously finished sixth in the Sunshine Millions Classic, is a multiple-stakes winner who captured last year’s edition of the Big Drama.

Jacks or Better Farm’s Garter and Tie, a Ralph Nicks-trained multiple-stakes winner, will seek to rebound from an off-the-board finish in the Sir Shackleton Saturday. The homebred son of Brooks ‘n Down, who finished second behind Royal Squeeze in last year’s Big Drama, was coming off an eight-month layoff in the Sir Shackleton.

Emisael Jaramillo has the call aboard Garter and Tie.

Mathis Stable LLC and Madaket Stables LLC’s Last Judgment and Eric J. Wirth’s With Verve round out the field.