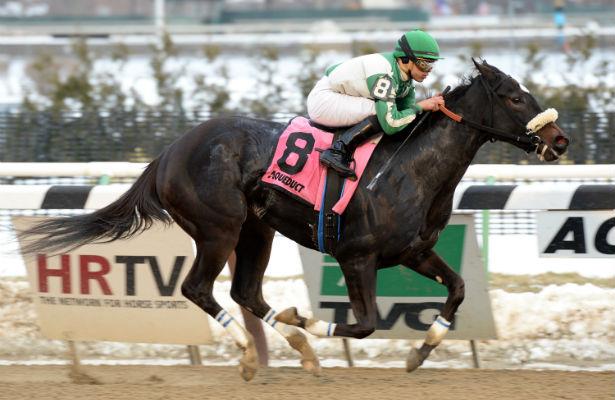 The More Than Ready filly broke from the outside post position 8 and led the field through an opening quarter-mile in 23.55 seconds, with the half going in 46.97. Turning for home, Hard to Stay Notgo opened up in the stretch to beat favorite Golden Gem win by 5 ½ lengths.
"I had talked to the assistant trainer before, and he just told me to get out in front and keep going and that's just what the horse did," said Arroyo. "He was perfect."
Hard to Stay Notgo completed the six furlongs over a fast inner track in 1:12.30
"She's hit or miss, and she's a little problematic to train, but she's a vintage inner-track type filly," said Steven Moyer, assistant to winning trainer Jimmy Jerkens. "She's naturally very fast; that's all she wants to do."
The Franklin Square marked the first career stakes victory for Hard to Stay Notgo, and her first victory since her debut on August 6 at Saratoga Race Course. She followed that impressive maiden performance with a second-place finish in the Seeking the Ante Stakes in Saratoga before subpar third-place finish in the Joesph A. Gimma stakes on a muddy track on September 21 at Belmont Park.
"We liked her when she broke her maiden at Saratoga, and we loved her when she ran back in the [Seeking the Ante]," said Moyer. "She trained really, really good coming into this race; the problem was there was never an New York-bred [allowance race] in the book. She couldn't have been any better in the receiving barn and the paddock today, and before she wasn't like that. We're thrilled with her performance."
Hard to Stay Notgo returned $15.20 for a $2 wager and earned $75,000, boosting her career earnings to $173,800 for owners Chester and Mary Broman.