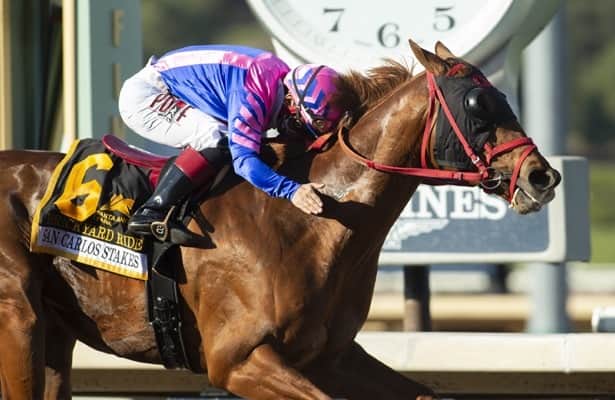 Fresh off the best race of his career, the Craig Lewis-trained Brickyard Ride, along with Bob Baffert’s multiple stakes-winner Ax Man and Cezzane, head Sunday’s Grade 3, $100,000 Kona Gold Stakes at Santa Anita.  Named for the  Breeders’ Cup Sprint winner and Eclipse champion sprinter for 2000, the Kona Gold has attracted four 3-year-olds and up going 6 ½ furlongs over the Santa Anita main track.

A 4-year-old California-bred colt by red-hot sire Clubhouse Ride, Brickyard Ride is owned by his breeder, Alfred Pais. A gate to wire winner of both the six furlong California Cup Sprint on Jan. 16 and the Grade 2 San Carlos Stakes going seven furlongs on March 6, Brickyard Ride has won four out of his last five starts since being paired with apprentice Alexis Centeno, dating back to a gate to wire allowance win going six furlongs here on Sept. 27.

“He’s blessed with a lot of natural speed (and) obviously, he’s learning how to relax,” said Lewis following the San Carlos, which was Brickyard Ride’s first try in graded stakes competition.  “He’s maturing, he’s a big powerful horse.  He reached for (more) ground like a horse that could run forever.  He’s starting to look like he could be the goods.”

A four-length winner of the San Carlos, Brickyard Ride, the lone Cal-bred in the field, earned a career-best 100 Beyer Speed figure, which narrowly topped his Cal Cup Sprint Beyer of 99.  Out of the Southern Image mare Brickyard Helen, Brickyard Ride, who cuts back in distance a sixteenth of a mile, will be bidding for his third consecutive stakes win and his eighth victory from 14 lifetime starts which have produced earnings of $380,277.

Ridden for the first time by Edwin Maldonado, the Hal and Patti Earnhardt homebred Ax Man went to the front and never looked back in an impressive 4 1/2 length win in the ungraded Santana Mile on March 28.

Although Ax Man, a 6-year-old Kentucky-bred gelding, is shortening up from a big effort going  two turns, it can be expected that Maldonado will employ similar tactics, as conceding the early advantage to Brickyard Ride would likely be an ill-advised strategy.

A non-threatening fourth as the 3-1 favorite two starts back in the Grade 3 Palos Verdes Stakes at six furlongs on Jan. 23, Ax Man, who is out of the Flying Chevron mare Shameful, earned a 95 Beyer in winning the Santana Mile, his second career stakes win.  With an overall mark of 16-7-0-3, he has earnings of $357,797.

Last summer, Cezanne knocked out his maiden and first allowance condition in his first two starts then tried the Shared Belief at Del Mar, where he finished fourth behind Thousand Words, Honor A.P. and Kiss Today Goodbye. The 4-year-old Curlin colt is unraced since that effort.

Cezzane has registered six weeks for Baffert starting on Feb. 25, which includes a gate drill in 59.2 on Sunday.