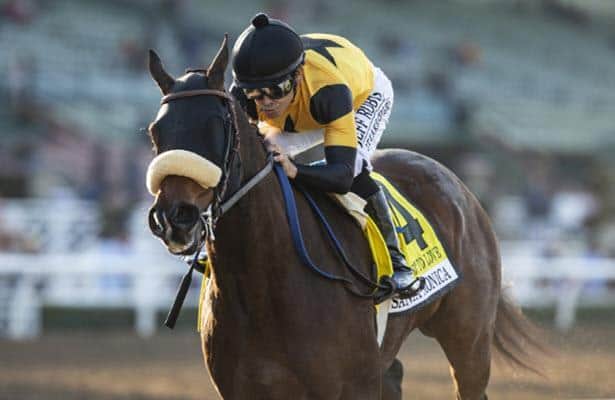 The 4-year-old Hard Spun filly was second to burgeoning Ce Ce in the Beholder after setting the pace until approaching the stretch run, losing the lead past the quarter pole.

The one-eyed bay showed her readiness for the Santa Maria with a bullet five-furlong workout last Sunday in 58.80.

“She came out of the work really well,” trainer John Shirreff’s said. “We had a little (racing) delay here, but other than that, she’s been running on a pretty consistent basis.

“I think that has helped her mature. Last time she drew the one hole so I hope we get a better post position Sunday.”

She didn’t. She drew the rail again.

Hard Not to Love has been favored in four of her seven races, the last two at odds-on. She has won five, with one second and one third for earnings of $488,480.

The Santa Maria gained in prestige and anticipation when trainer Michael McCarthy and owner/breeder Bo Hirsch entered streaking Grade 1 winner Ce Ce, setting up a rematch between her and Hard Not to Love.

Ce Ce also was being considered for the Grade 1, $600,000 Ogden Phipps at Belmont Park on June 13 before connections decided to remain home.

Ce Ce, a 4-year-old daughter of Elusive Quality out of Hirsch’s Grade 1-winning Miss Houdini, captured the Beholder Mile before traveling to Arkansas, where she edged Ollie’s Candy by a head in the Apple Blossom (G1) at Oaklawn Park April 18.

Overall, Ce Ce has four wins from six starts with earnings of $726,600 and is three for four at Santa Anita. Victor Espinoza, who has ridden her in all six races, will be aboard again in the Santa Maria.