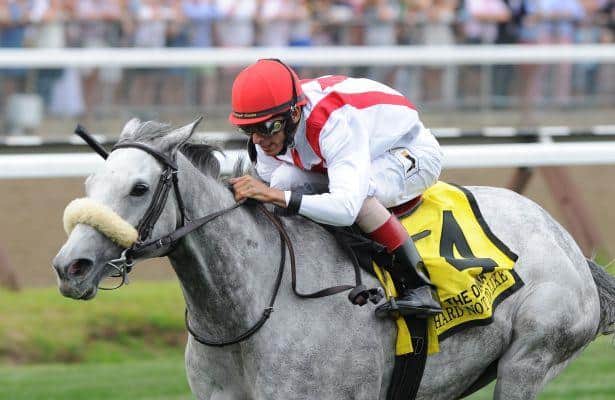 Photo: Adam Mooshian/NYRA
Grade I Stakes winning mare Hard Not to Like comes off her second win in a row and will seek her third in Saturday’s Grade I, $300,000 Rodeo Drive Stakes for fillies and mares, 3-years-old and up going 1 ¼ miles on turf.
The six-year-old mare’s first visit to Santa Anita was a winning one in late May when she scraped the rail with Victor Espinoza aboard in the Grade I Gamely Stakes to get up, just in time for the win over Fanticola and Joe Talamo by a neck.
Trained by Christophe Clement and primarily stationed at Belmont Park in New York, her most recent win came in the Grade I, Diana Stakes at Saratoga on July 25 going 1 1/8 miles on turf. In her first start for Clement on Jan. 31 having been previously trained by Michael Matz, she won but was then disqualified and placed second after coming out sharply late in the Grade III Endeavor Stakes at Tampa Bay Downs. She went on to a third place finish in the Grade I Jenny Wiley Stakes at Keeneland on April 11 over a yielding turf course.
Having only run four times thus far in 2015, she seems to thrive off a period of time in between races and looms large Saturday. The gray mare is owned by Speedway Stable LLC and is 20-8-3-2 overall with $1,261,671 in earnings.
Fanticola returns Saturday off a disappointing fourth to Elektrum in the Grade II, John C. Mabee at Del Mar on Aug. 8.  Following a neck loss in the Gamely after leading throughout, Fanticola went on to win the Grade II, Royal Heroine Stakes going a mile over the turf course at Santa Anita on June 27.
Fanticola was trained by the late Mike Mitchell and is now in the care of his protégé, Philip D’Amato. Fanticola, an Ontario bred, is owned by Anthony Fanticola and Joseph Scardino. The five-year-old mare by Silent Name will once again be ridden by Talamo and will break from the far outside. She is 18-5-5-6 overall with $483,300 in earnings.
Trained by John Sadler and owned by Hronis Racing LLC, Elektrum comes off a win in the John C. Mabee. Her first start in the U.S. came this year in February when she shipped in from France and joined the Sadler stable. She has only been out of the money in one start since, a fourth place finish in the Gamely when she was boxed in down the lane.
The 4-year-old Irish bred filly by High Chaparral will gain rider Tyler Baze for the first time and will break mid-pack. Elektrum is 15-4-4-2 overall with earnings of $299,438.