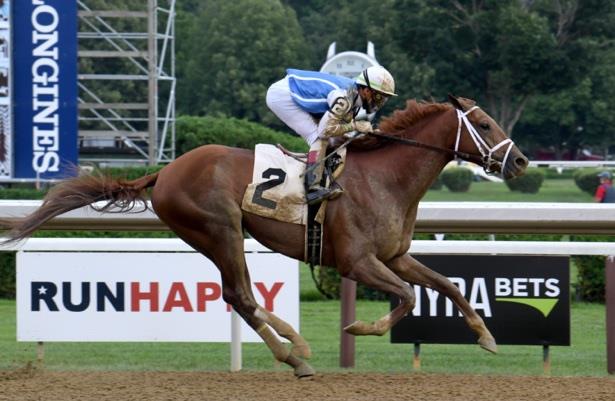 Wertheimer and Frere’s undefeated Happy Saver, a late-developing son of Kentucky Derby winner Super Saver, will take the next step in his progression when he faces stakes company for the first time in the $100,000 Federico Tesio on Monday, Sept. 7, at Laurel Park.

The 39th running of the 1 1/8-mile Tesio for 3-year-olds serves as the highlight of five $100,000 stakes on a special 10-race Labor Day holiday program that caps Laurel’s Preakness Prep Weekend. For the fifth straight year, the Tesio serves as a "Win and In" event for Triple Crown-nominated horses to the 145th Preakness Oct. 3 at Pimlico Race Course.

Also on the Labor Day card are the Weber City Miss for 3-year-old fillies, a "Win and In" race for the 96th Black-Eyed Susan (G2) on the Preakness undercard; and a trio of scheduled turf stakes for 3-year-olds and up — the 1 1/16-mile All Along for fillies and mares and the 5 1/2-furlong Laurel Dash and 1 1/16-mile Henry S. Clark.

Trainer Todd Pletcher cross-entered Happy Saver in Saturday’s Jim Dandy (G2) at Saratoga but said he favors sending the chestnut son of his first of two career Derby winners to the Tesio, a race the seven-time Eclipse Award champion won with Smoked Em in 2002.

“Our first preference is the Tesio, assuming that everything goes according to plan,” Pletcher said. “We were very pleased with his debut and impressed that he was able to stretch out in his second start to a mile and an eighth and win against older horses. We’re very pleased with the progress he’s made. We felt like the Tesio could potentially be a good segway toward the Preakness if he continues to develop.”

Unraced at 2, Happy Saver debuted in a seven-furlong maiden special weight on June 20 at Belmont Park, pressing a quick pace before taking over entering the stretch and sprinting clear to win by 5 1/2 lengths. He came back on July 26 at Saratoga, settling in mid-pack until making a six-wide move in upper stretch and going on to a four-length triumph at the Tesio distance.

“He seems to be very talented,” Pletcher said. “He had enough natural speed to win going seven-eighths and then was able to kind of sit off the pace in his second start and finish up strongly at a mile and an eighth. He’s already shown some versatility and professionalism in only a couple of starts.

“He’s one that we’ve been impressed with his training,” he added. “We’ve been breezing him with some good horses and he’s always held his own very well, so hopefully he continues to move in the right direction.”

Maryland’s four-time leading rider Trevor McCarthy has the assignment on Happy Saver from Post 4 of seven.

Cash is King and LC Racing’s Monday Morning Qb is entered to launch his comeback in the Tesio. Winner of the seven-furlong Heft Stakes last December in his only previous trip to Laurel, the Imagining colt has not raced since finishing fourth in the 1 1/8-mile Withers (G3) inn Feb. 1 at Aqueduct.

Trainer Robert E. "Butch" Reid Jr. said the connections decided to give Monday Morning Qb some time after the Withers, a break that was extended due to the months-long pause in live racing around the country amid the ongoing coronavirus pandemic.

“He really filled out nicely. He’s always been a big horse. I’ll be interested to see how much he weighs when we get down to Laurel, actually,” Reid said. “He really has filled out nicely and his joints have set up really well, just what we were hoping because he’s such a big guy. He couldn’t be training any better. We brought him back to the track off his breeze the other day and he’s just full of himself and happy. We’re excited with how he’s doing right now.”

Reid entered Monday Morning Qb in a one-mile turf allowance for Maryland-bred/sired horses on Aug. 28 at Laurel but he was unable to draw into the main body of the race and was scratched. He also missed the Maryland Juvenile Futurity at Laurel three weeks before the Heft after developing a fever.

“We’re asking a lot of him coming back going a mile and an eighth off a layoff, but we breezed him the other morning and he breezed sensational and galloped out good and strong and came back bouncing, so it looks like there’s an opportunity to take a shot,” Reid said. “If he comes up a little short, he comes up a little short but it’ll get him stretched out around two turns and that’s what we’re looking for with him.”

Monday Morning Qb is one of four Triple Crown-nominated horses in the Tesio, making the "Win and In" incentive an added bonus. Victor Carrasco is named to ride from Post 6.

“There’s still spots out there and that’s why we’re kind of pushing him to get this one under his belt and then look for something down the road. And I still think that he’ll turf, too, at some point so I’d definitely like to jump over and try that eventually,” Reid said. “He’s definitely handled the surface down there, so that’s at least part of the reason why we’re coming.”

Mexican Wonder Boy made his U.S. debut July 25 at Gulfstream Park, dismissing a challenge at the quarter pole and going on to a 1 1/4-length triumph in a one-mile optional claiming allowance. Most recently, he was fifth in a similar spot going 6 1/2 furlongs Aug. 16 at Gulfstream.

“The horse has good potential,” Gutierrez said. “He won the race at Gulfstream and then we were looking for a mile and a sixteenth, mile and an eighth, and we decide to run him at 6 1/2 furlongs. The horse had just a regular performance. It was a very, very hot day and it was not his best day. We think he has more potential and we were looking for options. I think the Federico Tesio is a good option for him.”

Gutierrez compared Mexican Wonder Boy to Letruska, a 4-year-old homebred filly he trained to a pair of Group 1 wins in Mexico in 2019, a victory over males in the Copa Invitacional del Caribe last December at Gulfstream and a win in the Shuvee (G3) last out Aug. 30 at Saratoga.

“He ran in Mexico three times going two turns and the horse ran very, very comfortable and won good. Of course, it’s a different level,” Gutierrez said. “The same was true with Letruska. This is a horse that has very similar conditions because he won in good times, even some days to run a little bit faster than other horses the same day. Letruska is a big horse and a good one and he is a little bit smaller but he has quality. We have to take risk and we have to try, no? This is the point. We have to give it a try.”

Horacio Karamanos gets the call from Post 5 at co-topweight of 124 pounds.

Colts Neck Stables’ Big City Bob won the one-mile Sapling last September at Monmouth Park in his third career start and first in a stakes but has gone winless since, including a fifth-place finish in the 1 1/16-mile Private Terms March 14 at Laurel in his 3-year-old debut. He ran sixth in the Pegasus, also at 1 1/16 miles, Aug. 15 at Monmouth in his last start.

Howling Pigeon Farms’ Amen Corner returned to the winner’s circle with a determined nose victory facing older horses in an open 1 1/8-mile allowance July 23 at Laurel. Trained by Laurel-based Jerry O’Dwyer, he joins Happy Saver as the only Tesio horses with a previous win at the distance. Earlier stakes attempts over the winter saw the Malibu Moon colt run fourth in Laurel’s Miracle Wood and seventh in the Rushaway at Turfway Park.

The Elkstone Group’s homebred Plot the Dots owns two wins and a second from four previous starts at Laurel for trainer Mike Trombetta. The bay son of champion Uncle Mo captured a one-mile waiver maiden claiming event Feb. 17 as well as a restricted 1 1/16-mile allowance over older horses June 26, the latter earning him a shot in stakes company, where he ran fourth in the July 26 Jersey Derby over the Monmouth turf. Plot the Dots was second as the favorite in a seven-furlong off-the-turf allowance Aug. 22 at Saratoga last out.

Completing the field is Randall Block and Six Column Stables’ Letmeno, runner-up in the Ellis Park Juvenile Stakes last summer. In his most recent start, the Ian Wilkes trainee finished first by a neck in the 1 1/16-mile Iowa Derby July 5 at Prairie Meadows but was disqualified to second for interference in the stretch.

The Tesio is named for the noted Italian breeder, owner and trainer whose hombreds Nearco and Ribot dominate Thoroughbred bloodlines around the world. Tesio died in Italy in 1954 at age 85.