Hank ‘The Hammer’ Goldberg will key 2 horses in Ky. Derby 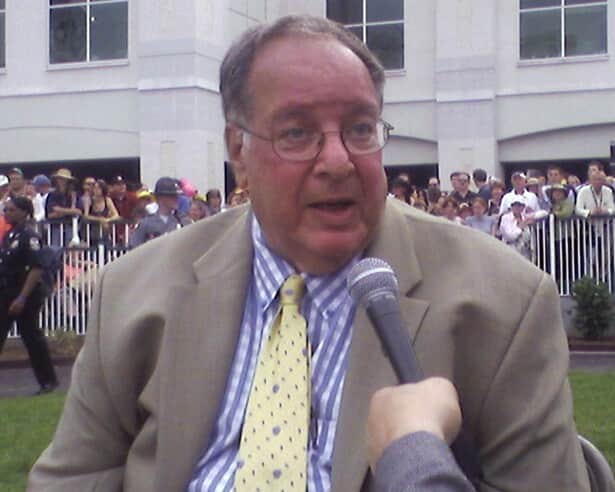 Hank “The Hammer” Goldberg is no longer prowling the backstretch at Churchill Downs for ABC Sports or ESPN, but that doesn’t mean the longtime broadcaster and handicapper isn’t focused on cashing a ticket in the 148th running of the Kentucky Derby.

The 81-year-old Goldberg has been battling health issues in recent years, including kidney disease and the amputation of his lower right leg that has caused him to begin using a wheelchair, but he’s still studying next Saturday’s race as if his life depended on uncovering the winner.

“This is a wide-open Derby,” Goldberg said this week from his home in Henderson, Nev. “I think six or seven have a chance.”

Handicapping the Derby is a process for Goldberg, whose nickname came from a stunt he used on a sports talk show on radio station WIOD in Miami from 1978 through 1992 when he would slam a gavel on his desk if he deemed his co-host “out of order.”

First comes a careful study of past performances, followed by analysis of the horses’ breeding, running styles and human connections. Then, after developing a preliminary list of the contenders, he turns to the network of well-placed sources cultivated during his years covering the Triple Crown and other top races for ABC Sports and ESPN from the late 1970s into the last decade to either hone his betting strategy or expand his pool of contenders.

It’s a technique that helped inform his on-air commentary and helped him engineer his greatest Triple Crown score.

That occurred after he went out for pizza with trainer Nick Zito on the eve of the 2004 Belmont Stakes.

“Nick kept talking about how well his horse had been training at Saratoga, so I used him on a number of my tickets.,” he said of the 36-1 score by Birdstone. “I hit the triple, the exacta and superfecta and it came back a little over $21,000.”

Goldberg discovered horse racing as a teenager in his native New Jersey, telling the Las Vegas Review-Journal recently that he hit a daily double at Monmouth that paid enough to buy his first car.

He played the horses there and in Miami after relocating there but said the Derby wasn’t really on his radar until he went to work as a researcher and ghostwriter for legendary Las Vegas sports handicapper Jimmy “The Greek” Snyder in the mid-1970s.

Chatting up trainers and other racing insiders was easier when Goldberg was on site covering the races, but he now uses the phone to gather information. That works because trainers, jockey agents and others return his calls out of respect for the hard work he put in during the years he was actively covering the race for the networks and working for Snyder.

Most of that work occurs during the final week before the Derby after all the potential entrants have completed their workouts.

Even then, he said, he allows for last-minute changes based on track conditions or any last-minute hiccups in preparations.

For now, “The Hammer” has his list of contenders in hand and is beginning to plot his betting strategy.

So far, he said, his top contenders are likely favorite Epicenter and probable long shot Charge It, with Zandon, Messier, Smile Happy, Mo Donegal, Tawny Port and Morello all in the mix for exotics.

Goldberg said he typically focuses on superfectas in pursuit of a serious Derby score and will likely key Epicenter and Charge It in the top positions while sprinkling in the other contenders and any others he adds to his list underneath.

Of his top two selections, Goldberg had this to say:

Epicenter: “You have to look long and hard at him because of the way he’s coming up to his best race and has never stepped back. (Joel) Rosario is probably the hottest jockey around right now, and (Steve) Asmussen wouldn’t run him if he didn’t like his chances.”

Charge It: “He’s a very good horse. Inexperience cost him in the last (a second in the Florida Derby after hitting the starting gate at the break), and if he can get out cleanly and hold his speed together, watch out.”

As for his health, Greenberg says he continues to undergo kidney dialysis three times a week and is recovering after the amputation of his right leg below the knee Oct. 29.

“I went in for some tests recently and did well,” he said. “The surgeon told me that there’s a good chance I’ll be able to walk again sometime. In the meantime, I get around in a wheelchair and am doing exercises with weights.”