Hank 'The Hammer' Goldberg dies at 82 from kidney disease 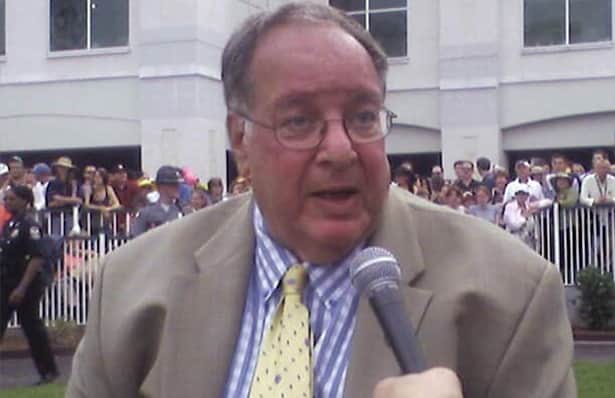 Hank Goldberg, a longtime handicapper and NFL reporter for ABC Sports and ESPN, died at his home in Las Vegas on Monday, his 82nd birthday.

His sister, Liz Goldberg, told the Las Vegas Review-Journal that the cause of death was chronic kidney disease, which he had fought for years.

Known as "The Hammer" or "Hammerin' Hank," Goldberg worked as the Miami Dolphins radio color analyst from 1979 to 1992, the Review-Journal reported, and he worked as a researcher and ghostwriter for legendary Las Vegas sports handicapper Jimmy “The Greek” Snyder in the mid-1970s.

Goldberg was born into sports media. His father, Hy, was a longtime writer for the Newark Evening News. His own career not only included his work on camera and at the microphone but also as a young ad man and working behind the scenes with Brent Musburger in the 1970s incarnation of "The NFL Today" on CBS Sports.

He joined ESPN in 1993, appearing on the network's "NFL Countdown" for 21 years and analyzing Triple Crown races on "SportsCenter."

"The first time I worked with Hank was at ESPN in 1992," Flatter said. "He would fly to Connecticut from Miami, where he had an enormously successful show on WQAM. He brought a Rolodex with him that was incredible. Someone would say, 'Can we get Don Shula?' and Hank would have him on the phone in minutes."

Starting in 1972 at WGBS, Goldberg was a fixture on South Florida radio, moving to WIOD where he was the analyst on Miami Dolphins broadcasts for 14 years before moving finally to WQAM from 1991 to 2007.

Goldberg spoke to Horse Racing Nation in late April and explained his approach to handicapping. (Read it here.) He said his greatest Triple Crown score came after talking with trainer Nick Zito before the 2004 Belmont Stakes.

“Nick kept talking about how well his horse had been training at Saratoga, so I used him on a number of my tickets,” he said of the 36-1 score by Birdstone. “I hit the triple, the exacta and superfecta and it came back a little over $21,000.”

In recent years, after moving to Nevada, Goldberg worked as a contributor for the website Vegas Insider. He was still working in June, the Review-Journal reported, analyzing the Belmont Stakes.

"I learned a lot about horse racing from Hank when I worked with him in Miami in 1995 and 1996," Flatter said. "When he wasn't at Gulfstream or Calder, he was carrying around a Form and handicapping all the time. One time when I saw him at Pimlico, he was cashing a ticket at the window. He turned around and said, 'Blinkers off, Flats. Blinkers off. Remember that. It's a great angle.' "