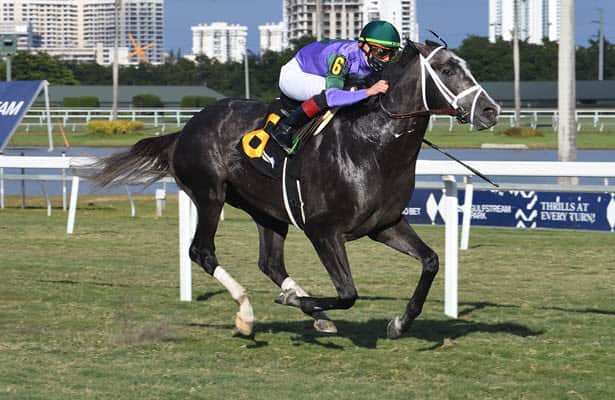 The Pegasus World Cup Turf Invitational is quickly becoming the premier winter turf route event in the nation. Bricks and Mortar began his 2019 Horse of the Year campaign with a victory in this race. Zulu Alpha captured this race in 2020, and he won two more graded turf routes later that season. This year’s renewal features twelve evenly matched runners and an upset could be in the offing. Before deciding how to bet Saturday’s eleventh race from Gulfstream Park, let’s meet the participants.

#5 Colonel Liam (7-2) raced wide in midpack behind below par fractions and powered home as the favorite in the Tropical Park Derby Dec. 26. He is lightly raced and talented, and Irad Ortiz Jr. rode him twice and he won both times. Todd Pletcher’s $1.2 million colt could easily take this event.

#8 Anothertwistafate (5-1) added blinkers, stalked the pace, and pulled clear in a sharp victory as my top choice in the San Gabriel (G2) Jan. 2. There is not much front end speed in this race and he should make his presence felt throughout.

#11 Say the Word (6-1) is a sharp, classy late runner with an affinity for this distance. Flavien Prat is an excellent turf rider and he can win this if he gets a clean trip and enough pace help.

#4 North Dakota (10-1) captured four of his last six starts and he packs a decent late kick. The Grade 3 winner shows turf bullets for this engagement.

#12 Social Paranoia (8-1) won four of his last six starts and gives Todd Pletcher a third realistic win threat. I have always liked this one and he enjoys this turf course but seems best at one mile.

#1 Next Shares (20-1) exits back-to-back graded show finishes in Southern California. He stalked and faded to last place in this event last year.

#6 Largent (9-2) won the Fort Lauderdale (G2) from off the pace as a 16-1 longshot, and he is a gem of consistency for Todd Pletcher. He adores this turf course and his running style versatility always leads to a comfortable trip.

#7 Aquaphobia (20-1) was not a serious threat in his last three graded turf routes. He upset the United Nations (G1) at Monmouth Park last summer.

#9 Cross Border (15-1) missed by a head vs. lesser in the Diliberto Memorial at Fair Grounds Dec. 19. This is a very tough spot.

#10 Pixelate (15-1) rallied to win the Woodchopper at Fair Grounds Dec. 26 and that race was restricted to sophomores. He is probably outclassed.