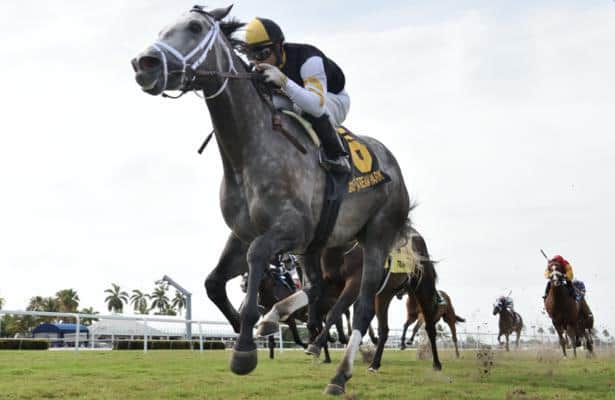 With a wire-to-wire score in Saturday’s $75,000 Sunshine Forever Stakes, the 4-year-old Halladay continued a run of good form at Gulfstream Park.

The War Front colt, who entered 2-for-2 over the surface, improved on that record once ridden to the lead by jockey Luis Saez. They never looked back, clicking off opening fractions of 23.71 and 47 seconds before Halladay got to work in the lane.

Aquaphobia tried to close from midpack as Halladay's Todd Pletcher stablemate Social Paranoia rallied from even farther in the field for third. Halladay held them at bay as the 6-5 betting favorite in this weekend’s lone stakes event.

“He was really relaxed early on,” said Pletcher, who trains Halladay for Harrell Ventures LLC. “He didn’t break great. Luis did a good job of establishing some position. But he got to the front and kind of pricked his ears a little bit.

“Sometimes he can be a little headstrong. He was coming into this race training really, really well and had been a little more relaxed than usual. I think we’re starting to see that in the afternoon as well.”

The gray or roan colt also won Gulfstream’s Tropical Park Derby back on Dec. 28 and annexed a local allowance race on April 4. In between, he took on graded company for the first time, running fouth in the Tampa Bay Stakes (G3) on Feb. 8.

The Tampa Bay Stakes remains Halladay’s only off-the-board finish as he ran his record Saturday to 5-2-4 in 11 starts.

“He’s really developed into a beautiful horse,” Pletcher said. “You can see in his training — just very confident, very happy and coming into the race exactly how you’d like one to be doing.”

Three scratched from the Sunshine Forever, prominent among them War of Will, who would have made the race his 4-year-old debut in a switch to the lawn. Trainer Mark Casse has rerouted the 2019 Preakness Stakes winner to Santa Anita Park’s Shoemaker Mile (G1) scheduled for May 25.