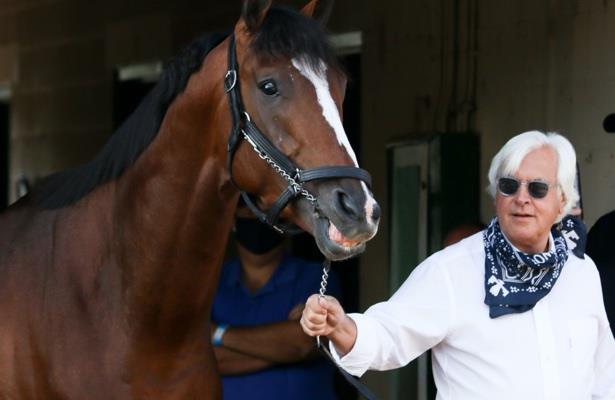 There are some things that Bob Baffert cannot control in a horse race. The weather. The size of the field. Things like that. Over time, he has learned not to sweat over them.

So where did the Hall of Fame trainer who has won the Preakness Stakes a record seven times keep track of the draw for Saturday’s race?

“I was at the Cracker Barrel,” Baffert said Monday afternoon by phone from Louisville. “They didn’t show the draw. And somebody told me it was at 1 o’clock.”

No. It was at noon. Not that he could have done anything about it when they pulled the pills at Pimlico. Baffert’s latest Kentucky Derby winner Authentic drew post 9 and was made the 9-5 morning-line favorite. His stablemate Thousand Words drew post 5 in the field of 11 and was made a 6-1 shot by Pimlico track handicapper Keith Fuestle.

Even after the results of the draw were shared with him, Baffert came back to something that he has contended for years.

“The break is the most important,” he said. “You’ve got to get away well. Authentic is on the outside. I like to be around the middle; I don’t like to be too far out. But 9? That’s fine.”

Art Collector (5-2), Swiss Skydiver (6-1) and Ny Traffic (15-1) might try to bring an early challenge to Authentic, but Baffert said he was not concerned. “There’s always speed,” he said. “Everywhere you go there’s speed. You can’t worry about that.”

Based on how Authentic raced to the front and never looked back in winning the Derby, the worry might be elsewhere with other horses that would dare to challenge Hall of Famer John Velázquez for the early lead.

After missing the Derby because of a minor leg injury, Blue Grass (G2) and Ellis Park Derby winner Art Collector figures be among the leaders after breaking from the 2 hole with regular jockey Brian Hernandez Jr.

“If he gets away cleanly, he’s tactical enough that I would expect him to be forwardly placed at least until they get into that first turn,” Art Collector's trainer, Tom Drury, told reporters Monday afternoon. “Ideally you’d like to be forward going by the stands for the first time and have Brian able to look around a little bit and see how the race is developing. Then he can make up his mind about what he wants to do.”

The first filly to be in the Preakness in six years, Blue Grass and Kentucky Oaks runner-up Swiss Skydiver might be asked by her new jockey, Robby Albarado, to resist the urge to go to the lead.

“How the race sets up will be interesting,” her trainer, Kenny McPeek, said after the draw. “The 4 is a good spot for her. But no, I’m not sure we would try to go the lead right away. Her best race is when she hits 48 (seconds) for the first half-mile.”

Ny Traffic tried to challenge Authentic in the first half-mile of the Derby before he faded to finish eighth. He will start Saturday from post 7 with Maryland jockey Horacio Karamanos getting the call from trainer Saffie Joseph Jr.

After flipping onto his side in the paddock and being scratched from the Derby, Thousand Words will wear blinkers for the first time since April. Without them, he finished second in the Los Alamitos Derby (G3) and first against only three others two months ago in the Shared Belief at Del Mar. With them, he rated the pace in winning the last year’s Los Alamitos Futurity (G2) and this year’s Robert B. Lewis (G3) at Santa Anita before he finished out of the money in the San Felipe (G2) and the Oaklawn Stakes.

“It’s a little blinker, it’s not a lot of blinker,” Baffert said. “Just enough to keep him focused. He worked better with them the other day.”

Because of pandemic complications, Florént Geroux will be the fourth different jockey in as many races to ride Thousand Words. They would have been paired in the Derby if not for the paddock accident.

Baffert has been in Kentucky since the Derby, keeping his Preakness colts in the Churchill Downs barn of D. Wayne Lukas. He also has been busy at the Thoroughbred sales that wrapped up last week. He, Authentic and Thousand Words fly to Baltimore on Tuesday.

They will, however, be without assistant trainer Jimmy Barnes, who fractured his right wrist breaking his fall when Thousand Words toppled at the Derby.

“He got nine screws and a plate in surgery,” Baffert said. “He’s bionic. He’s got plates in his pelvis and now in his wrist. I don’t think he can get on a plane right now. He looks like the Terminator.”

Spectators also will be absent from the Preakness. The decision to exclude them because of the coronavirus was made early this month. The InfieldFest concert, which was added to the Preakness program 10 years ago, was canceled in April even before the Preakness was pushed back from its original May 16 date.