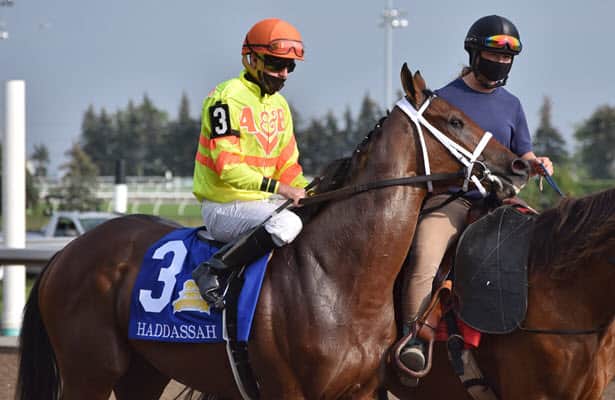 Haddassah (6-1) stalked the early pace, captured the lead turning into the stretch and held on for an upset victory Tuesday afternoon at Fort Erie in the 86th running of the US$315,120 Prince of Wales Stakes, the second race in the Canadian Triple Crown.

The gelding by Air Force Blue was challenged late by stablemate Harlan Estate (3-1) but held on for a half-length victory, giving trainer Kevin Attard a one-two finish in the classic for Canada-bred 3-year-olds on dirt.

“This horse has always shown a lot of promise and ability,” Attard said of Haddassah. “He just hadn’t put it together yet. Obviously, he’s here today. He got the job done, and we’re really proud of him.”

Keep Grinding (9-2) was third, H C Holiday (4-1) finished fourth, and narrow favorite Curlin’s Catch (3-1), the only filly in the field of eight, was fifth. Keep Grinding's third-place finish made it an Attard family trifecta. He is trained by Tino Attard and is owned by Joshua Attard.

It was the second Prince of Wales score for Attard, who had previously won in 2007 with Alezzandro. Jockey Gary Boulanger and breeder-owners Al and Bill Ulwelling won the race for the first time.

“He’s starting to mature,” Boulanger said. “He was a lot more settled today. He responded when I wanted to.”

With his first four starts coming at Woodbine, Haddassah won on debut last November in a maiden race that was taken off the turf. After seven months on the bench, he finished third in a turf allowance race, third in the Marine Stakes (G3) and eighth last month the Queen’s Plate, the first Canadian classic of 2021. He prepped at Fort Erie with a 48.6-second, four-furlong breeze last week.

Conspicuous by his absence Tuesday was Safe Conduct, who won the Queen’s Plate on Woodbine’s synthetic track in Canada’s first classic of 2021. He and Riptide Rock, the top two finishers in the Aug. 22 race, were not nominated for the Prince of Wales. Their owners and trainers decided against running them on the dirt surface.

The Canadian Triple Crown series ends with the Oct. 3 running of the Breeders’ Stakes, a 1 1/2-mile turf race at Woodbine.