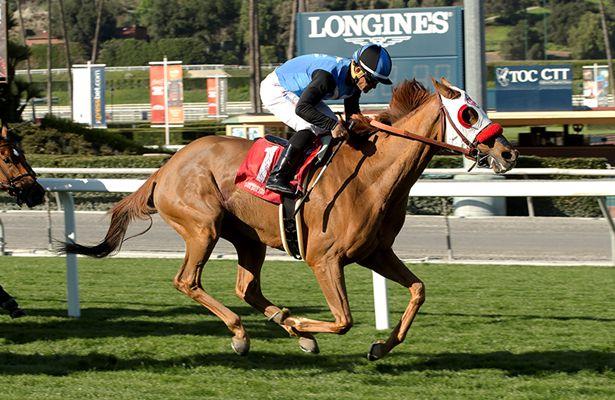 Each weekend we reach out to our network of editors, writers and bloggers for their thoughts on the country's biggest stakes races.

On Sunday, we've lined up stakes picks from coast to coast, starting with Belmont's English Channel, then to Santa Anita's Anoakia and finally Keeneland's Dowager.

Best of luck! Now, to the picks…

Analysis: Souper Tapit returns to the races off a five-month layoff. The last time we saw him, he won the Marine Stakes at Woodbine over the Tapeta surface. After three races on dirt, the Live Oak homebred switched to a different surface and dominated his competition. This will be his turf debut, but his pedigree suggests he should take to the surface. His dam, Grade 1 winner Zo Impressive, has a family that's full of turf winners. Coming into this race off a bullet work on Oct. 14, this son of Tapit is ready to roll on the Belmont turf course.

Analysis: No Dozing was overmatched in the G1 Allen Jerkens last time. Dam has produced two turf winners and trainer Delacour is 14-for-42 (33%) first turf.

Analysis: I think Souper Tapit will do just fine on the turf after running on the all-weather at Woodbine last out. This will also be No Dozing's first start on the turf, so I am anticipating he can move up a bit.

Analysis: Souper Tapit has never raced on the grass, but a repeat of his only effort over Polytrack will put him straight in the winner’s circle.No Dozing has also yet to try turf, but is bred for lawn and a mile is his best distance. #11 Fact Finding looks to be the dangerous lone speed in the race.

On the board: #10 Souper Tapit

Analysis: The weather looks to keep this on the turf, so limiting the selections, Souper Tapit could put in quite a show as a first time turf starter. However, I'll stick with Chad Brown and the greenly raced Lets Get Loud when the running is on the green stuff.

Analysis: The English Channel attracted a mixed bag of runners that includes horses that were briefly on the Kentucky Derby trail, some of which have not yet run on the grass. Fact Finding won three in a row to start his career and then something went amiss in the Sam F. Davis. I think his return in the turf sprint could be pointing to a big effort here.

Analysis: Steph Being Steph showed marked improvement in her Los Al graduation run Sept 8 and the 2-3 finishers from that heat were next out winners. An outside stalking trip is expected.

On the Board: #3 Artistic Diva, #5 Steph Being Steph

Analysis: Just a Smidge has run the fastest of all entries by getting an 80 on her debut. She hasn't placed since, but she has the right trainer, jockey, and pedigree to get back to winning form.

Analysis: Look for Just a Smidge to sit off a contested early pace, while taking the blinkers off, dropping in class and cutting back to a sprint for Bob Baffert. Chatty appears to be the speed of the speed, but has never raced past 5 1/2 furlongs and draws the dreaded rail going 6 1/2 furlongs.

Analysis: Blinkers come off and a drop in class will hopefully see her return to the form for Just a Smidge's maiden. Including a reduction in distance and the outside trip, I like her chance.

Analysis: Apple Betty is in great form heading into this race. The full sister to 2013 Breeders’ Cup Turf winner Magician comes off a 4th in the Waya Stakes at Saratoga. Apple Betty made her U.S debut in this race one year ago and finished 2nd. This is a course that she likes and is facing a field that isn't as tough as she has been raced all year, such as  Dacita, Hawksmoor, and Sea Calisi. Apple Betty also won the River Memories going 1 1/2 earlier this year, so distance is right up her wheelhouse. Apple Betty's pedigree and stamina will get her to the wire first in the Dowager.

Analysis: Lottie is fresh and gets pace to chase in the paper race. She was in the frame in four straight prior to her last and beat today's favorite Grateful at Belmont June 2.

Analysis: A 1 1/2-mile race is always somewhat difficult to work on, but Apple Betty have won at the distance, is bred for it, and has run well at Keeneland before — all things I want to see from my pick.

Analysis: Lottie loves the distance and will have plenty of pace to run into. Promotional’s two best speed figures were at the distance, and she tends to run her best races off a layoff. Likely favorite Grateful finished ahead of War Flag last out, who came back to win the Grade 1 Flower Bowl at Belmont.

On the board: #3 Place des Vosges

Analysis: The only thing that should stand in Lottie's way to win is the wall of speed horses backing up down the lane. Watch out for Promotional, another closer who runs well off the layoff and has been working well into this race.

On the board: #5 Daring Duchess, #6 Promotional

Analysis: The 12-furlong Dowager comes up as a turf contest loaded with horses that like to run on or near the lead, thus the closers should have an ideal setup. The best of them appears to be the Graham Motion runner, Lottie. Can Trainer Tim Glynshaw continue his magical run with Polar Vortex? She would be another very big price.