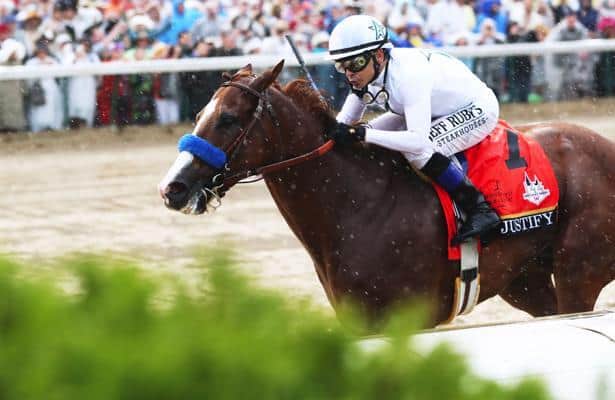 What’s the type of moment that will resonate far beyond 2018? Those mentioned by Horse Racing Nation staff range from personal experiences to horse racing history. Here’s a look, and be sure to share your own favorite moments from this year in the discussion below.

I remember clearly being disappointed I had to work at the hospital on June 6, 2018. An average day requires a 12-hour shift, and this was no different. That meant I could not watch the Belmont Stakes with my family as we typically do every year, and I wasn’t sure I’d get to see Justify’s run at history at all. The race was happening during shift change, and being in a Pediatric ICU Level 1, anything at any time can come rolling through the door.

Luckily, I found an empty patient room and tuned into the race. I had forewarned all the nurses around that if they heard screaming and crying from that room, there was no reason to come running with a crash cart. There was zero interruptions, luckily, as Justify crossed the finish line. I yelled as softly as possibly and fist pumped the air before turning off the TV. I felt my eyes welling up with tears as I walked back onto the unit. All the nurses and doctors were rushing about getting report. One of the doctors, who follows racing saw me across the unit. Both of us in disbelief at what we had witnessed, hugged. I’ll never forget it.

The 2018 Kentucky Derby wasn't my first in person. It also wasn't the first time that I was at Churchill Downs to see an eventual Triple Crown winner score the first of three jewels. Yet, there was something about watching Mike Smith aboard Justify in the rain as the duo returned in front of the grandstand and approach the winner's circle. The favorite that was vying to become the first Kentucky Derby winner unlike any other since Apollo in 1882 delivered with a dominant performance. It was a brilliant day of racing despite the nasty weather conditions, and watching Justify make his way back to the winner's circle was the perfect ending to a memorable day at Churchill Downs.

On my way to Louisville for this year’s Run for the Roses, I visited Silver Charm, the 1997 winner who resides at Old Friends Farm, an aftercare facility in Georgetown, Ky. The champ is now 24 years old. His once iron-gray coat, aged by time has turned white, but he’s in good health and greets countless visitors daily.

Back in February of ’97, I watched Silver Charm win an early prep, the San Vicente Stakes, on television and then proudly proclaimed him as my pick to win the Derby. Where anything can happen on the Derby trail, it was a daring selection three months away from the big race. However, on that first Saturday in May, Silver Charm made sure my unabashed confidence in him did not end in disappointment as he held off a furious late charge to win. By virtue of my early prediction, I felt immediately connected to Silver Charm. It’s a strong bond that has never left me. Even though Silver Charm has been retired from racing since 1999, my deep love and admiration for him never diminished.

Back at Old Friends, Silver Charm nibbled on the carrots I fed him and listened as I relayed my story to him. Then, for a moment, he stopped chewing and stared at me, as if to say, “thank you.” No, thank you Silver Charm for allowing me to be in your presence. This momentous occasion filled my heart and made me wholly content. The phrase “never meet your heroes” doesn’t apply to horses.

After his performance in the 2017 Breeders' Cup Classic, there were hardly any doubters regarding Gun Runner's talent at a mile and a quarter. And if there was any doubt about his ability to handle a mile and an eighth, it was quickly dispelled in what would be the last race of Gun Runner's illustrious career. The son of Candy Ride made it a fitting finish to a career in which he won 12 of 19 starts and earned $15,988,500. The performance he delivered from an outside post position is up there with any in 2018 as a prelude to his beginning at stud.

A “where were you” moment occurring during a first level allowance race on a Sunday afternoon at Santa Anita Park was certainly a first for me this year. But when Justify galloped to win his second start at Santa Anita Park, he set the tone for an eventual historic campaign through the Triple Crown series. Minutes after crossing the finish line on March 3, Justify was drawing comparisons to Easy Goer by his new rider, Hall of Famer Mike Smith. Hours later, a colt that hadn’t even started in a stakes race closed as the individual favorite in Pool 3 of the Kentucky Derby Future Wager. The hype, as well all now know, turned out to be justified.

While Abel Tasman survived an inquiry in the Personal Ensign (G1), Monomoy Girl did not keep her record in tact about a month later in the Cotillion Stakes (G1), with the stewards’ decision in Pennsylvania a key moment in the racing season that sparked debate about transparency and rulings. The Cotillion ended up Monomoy Girl’s only loss of the year as Midnight Bisou was elevated to first. Whether you agree with the decision, it seems this was a conversation that needed to be started, with reaction to the decision beginning a path toward potential change.

Already the 2017 Prix de Arc De Triomphe winner, Enaable returned as a 4-year-old — but only after a significant wait. Due to setbacks, she did not race until September, but that didn’t stop the John Gosden trainee from entering the gates as the favorite in this year’s Arc. With a second straight win — this one off just one prep — the decision was made to ship her to the Breeders' Cup. As is well known now, no horse had ever won the Arc and a Breeders’ Cup race in the same season. With charismatic Frankie Dettori on board, the filly pulled off the previously impossible feat. In 2018, she stood out as the Breeders’ Cup’s top star, and I’ll remember it for a long time to come.