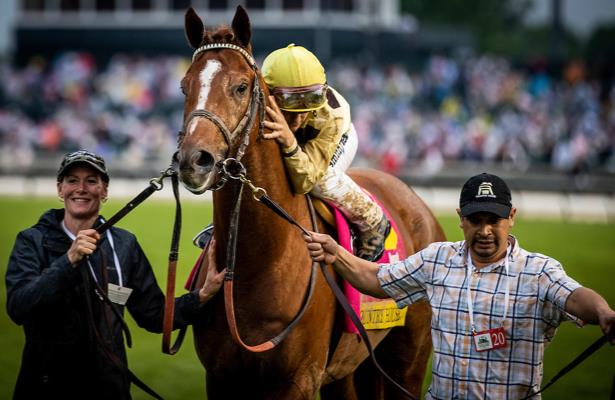 Equine fatalities and the ensuing safety reforms dominated horse racing (and national news) headlines throughout 2019. With that sector of the industry well-documented, Horse Racing Nation contributors have weighed in on other subjects they regard as top stories from the concluding year.

Bee Buck: A different view of the Derby DQ

While those still on hand at Churchill Downs were reeling from Maximum Security’s controversial Kentucky Derby disqualification, I turned in my memory cards and made my way back to the Bill Mott barn for photos of Country House the beneficiary of that decision. Once at the barn, several of us photographers stood around talking about the stewards’ historic call. I looked up at the sound of hooves on the pavement to see a horse coming toward us from the testing barn. It was Maximum Security. His groom looked down, and understandably so. He had just experienced a massive high and low all within a half hour’s time. What caught my attention more, though, was the demeanor of Maximum Security. His head was down, farther than most horses walking thhe backside. While caught up in trying to photograph the winner, I didn’t think too much of it at the time. Looking back, it registers as an incredibly sad moment and story — the agony of defeat.

Is there any matching Belvoir Bay winning the Breeders' Cup Turf Sprint? Just two years ago, the fires at San Luis Rey Downs broke out, putting the lives of hundreds of horses at risk. For many, including Belvoir Bay, the only solution at the time was cutting them loose from barns, free to run from the blaze. The filly went missing for days before she was found in a local resident’s backyard covered with burns. Belvior Bay was nursed back to health and thrived upon her return. She won five more races, plus had a placing behind Blue Point in last spring’s Al Quoz Sprint (G1) on the Dubai World Cup night card. It was, however, her Breeders’ Cup victory that makes the story most memorably. The 6-year-old mare set a new track record in a front-running victory over the boys, again showing the same kind of heart that made her a survior two years ago.

Santa Anita found a convenient scapegoat for its woes this year: Jerry Hollendorfer. The Hall of Fame trainer was banned from The Stronach Group’s facilities after four of his horses died during the tragic spate of fatalities in California. New York followed suit this summer, denying him stalls at Saratoga. Only court order permitted Hollendorfer’s runners in his name at Del Mar. The lone track allowing him to race and stable out west was Los Alamitos, as the Breeders’ Cup joined in barring him from entering the championship events.

I can think of no other time that a Hall of Famer has been shunned in this way. Hollendorfer had no violations in the past year for banned medications — only an overage for a therapeutic. While it is tragic that his stable suffered four losses, the track could not point to anything in particular that he did to cause those deaths. A CBS news report on the Santa Anita fatalities included interviews with another trainer who made it clear he didn't particularly like Hollendorfer, but again, there was no reason for the ban.

I don't know Jerry Hollendorfer personally. He may, in fact, have a prickly personality. But he can train a horse. Chapion Songbird, Kentucky Oaks winner Blind Luck and the talented Shared Belief all hailed from his barn. This course of action should send a cold chill through every horseman. If they can do this to Hollendorfer, what could happen to a trainer without such a storied career? And in the end, as we’ve seen time and again in the second half of the year, banning Hollendorfer didn't prevent horses from dying in California.

Among the strangest developments of the 2019 Kentucky Derby victory going to Country House is that he hasn’t been heard from since, both to give connections a chance to revel in that victory and silence doubters who insist he’s not talented enough to own it.

Trainer Bill Mott initially announced that his first-ever Derby winner would skip the Preakness Stakes due to a cough, and in June, the word was the Lookin At Lucky colt would miss the rest of this season with an extended vacation on the farm.

Winning the Kentucky Derby is usually the catalyst for more major race targets and lucrative stallion contracts. Country House, at least to this point, isn’t in line for either of those. What’s the next move?

Jockey Irad Ortiz Jr. put on a riding clinic at Santa Anita Park from Nov. 1-2. He started quickly on Breeders’ Cup Friday with a victory aboard Four Wheel Drive in the Juvenile Turf Sprint. He dominated Saturday’s championship events, too, with wins atop Spun To Run (Dirt Mile), Horse of the Year candidate Bricks and Mortar (Turf). and Vino Rosso in the Classic. He was aggressive aboard Four Wheel Drive and Spun To Run, showed tremendous patience on Bricks and Mortar, and put Vino Rosso in the right tactical spot throughout. For fans of riding tactics and strategy, it does not get any better than that. And for Ortiz, it likely means another Eclipse Award nod when the championships are announced in late January.

Jonathan Lintner: They're (almost) all coming back

Retirements in recent years by some popular 3-year-olds, namely the Triple Crown winners American Pharoah and Justify, ratcheted up the discourse about how soon is too soon to see top horses head off to breed. Perhaps this year’s an exception, and quite possibly an opportunity to prove it’s worth staying on the racetrack. None of the three Triple Crown race winners — Country House, War of Will and Sir Winston — are retired. Neither are the Haskell (Maximum Security) and Travers (Code of Honor) heroes. Spun to Run emerged late from this class to win the Breeders’ Cup Dirt Mile, too.

There’s some enticing purse money to chase on the racetrack now, particularly via the Pegasus World Cup, Breeders’ Cup and overseas events like the Saudi Cup and Dubai World Cup. Of the males, only Omaha Beach's departure to the stud barn feels premature. On the female side, the fillies and mares are coming back in droves, too. Led by Midnight Bisou, the group also includes Breeders’ Cup Mile heroine Uni, champion turf star Sistercharlie and Grade 1 winners Bellafina, Got Stormy and Mia Mischief.

Racing fans went through quite a bit in 2019. Here's to a brighter outlook for next year.

No horse was in the headlines in 2019 more than Maximum Security. It seemed like no matter what trainer Jason Servis and owners Gary and Mary West did during the year, it was destined to be big news.

His debut victory in a $16,000 claimer made him the most debated horse on the road to his powerful Florida Derby score. Then the Derby disqualification led to outcry by Gary West, a lawsuit against the Kentucky Horse Racing Commission and a $20 million challenge to the colt’s Derby rivals.

Later in the season, Maximum Security had to overcome a severe bout of colic after his victory in the Haskell (G1), counting him out of the Breeders’ Cup. But the son of New Year’s Day just kept on winning.

Maximum Security came back from colic to beat older horses in New York twice, finishing his year with a dominant victory in the Cigar Mile (G1). In 2019, he was beaten across the finish line only once and ended the year with a record of 8: 6-1-0 and earnings of $1,791,100 that will likely produce his best headline yet: Maximum Security named Champion Three-Year-Old Male.