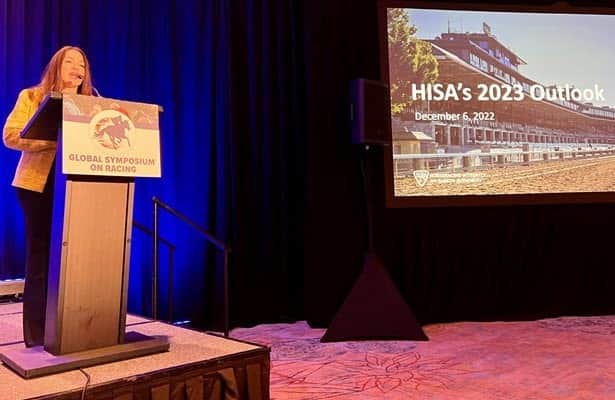 The Hatfields and the McCoys. The Sharks and the Jets. Horsemen and HISA.

These are some of the more famous feuds in American history, but Horseracing Integrity and Safety Authority chief executive officer Lisa Lazarus does not want it to be that way.

“We should be like family,” Lazarus said Tuesday during the University of Arizona’s Global Symposium on Racing. “Let’s fight like hell behind closed doors but speak publicly in one voice.”

RELATED: Senate may try to fix contentious creation of HISA.

A collective of 12 horsemen groups scored a victory in the current HISA rivalry last month when the Fifth Circuit Court of Appeals struck down HISA’s current setup as unconstitutional. The Sixth Circuit will address a similar appeal Wednesday, but Lazarus avoided discussing the legal conflict.

“That’s for the lawyers to argue,” Lazarus said after her prepared comments. “We believe in the constitutionality of HISA, but my message today was about coming together.”

Those prepared comments included the top 10 things Lazarus has learned about horse racing in her time as HISA CEO. One subtle shift appeared to be an increased focus on jockey safety.

“When outlining HISA’s 2023 outlook, jockey safety is a priority alongside horse safety,” Lazarus said. “We have an obligation to protect all of our athletes.”

Lazarus and her staff have a conference room at the symposium and invited all attendees to discuss any issues, problems, suggestions, etc. they may have.

“I love when people tell me they hate a rule,” Lazarus said. “That means they’re engaging. They’re talking about racing. They want us to be better. I welcome those voices.”

The end goal, though, Lazarus emphasized multiple times had to be a unified front with HISA and the organization to deliver it.

“Everyone wants to be competing using the same rules and the same regulations, and they want to be confident that they’re competing fairly,” Lazarus said. “This is essential.

“If racing wants one national regulator, it can only be achieved by federal law, because compacts and voluntary agreements do not work and would leave us with a tiered, non-uniform system.”

Lazarus concluded with a plea to recognize there were serious questions surrounding racing’s social license to operate.

“This is our moment, and it’s unlikely to ever replicate itself,” she said. “HISA’s guiding principles are collaboration, accountability, transparency and unity, but the most important for me is unity. I’m asking all of you that if we do anything, we need to unite.”