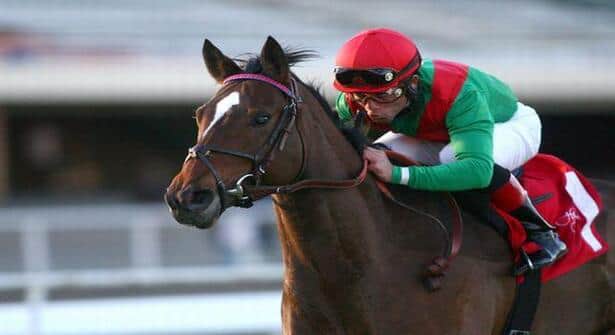 Gypsy’s Warning will try to become only the second repeat winner when she faces eight opponents in the $250,000 Matriarch Friday at Hollywood Park.


A Grade I for fillies and mares at one mile, the Matriarch helps kick off Hollywood Park’s three-day Autumn Turf Festival. Other Festival events include the $100,000 Miesque (Friday), the $250,000 Citation Handicap (Saturday) and the $100,000 Generous Stakes and $250,000 Hollywood Derby (Nov. 27). Both the Miesque and Generous are Grade III races. The Citation is a Grade II and the Hollywood Derby is a Grade I.

The only female to win the Matriarch more than once is Flawlessly, who won three in succession (1991-1993) for Harbor View Farm, trainer Charlie Whittingham and jockey Chris McCarron.

Owned by Flaxman Holdings Ltd. and trained by Graham Motion, Gypsy’s Warning will be aiming for her first win since taking the Matriarch by 1 ¼ lengths in 2010.

The 6-year-old daughter of Mogok and the Royal Chalice mare Gypsy Queen has been off the board in four subsequent starts. Her most recent effort was a sixth in the Grade I First Lady Oct. 8 at Keeneland.

The South African bred, who has won seven of 20 and earned $513,912, is one of a trio Motion is scheduled to run in the Matriarch, joining Unbridled Humor and Summer Soiree.

A 4-year-old gray filly by Distorted Humor out of the Unbridled mare Devotion Unbridled, Unbridled Humor has won five of seven and earned $197,420 for owner-breeder Live Oak Plantation.

The lone stakes win for the Florida bred came in the Grade III Noble Damsel Sept. 18 at Belmont Park.

Owned by Team Valor International, the 3-year-old daughter of War Front and the Mazel Trick mare Mazel Tov is 5-for-12 with earnings of $383,680.

If Summer Soiree is successful Friday, she will become the first 3-year-old to win the Matriarch since Price Tag in 2006 and only the fifth in race history. Besides Price Tag, the others are: Castilla (1982-second division), Flawlessly (1991), Ryafan (1997) and Dress to Thrill (2002).

A two-time winner of the Matriarch with Auspiciante (1986) and Tout Charmant (2000), Hall of Fame trainer Ron McAnally will send out the much improved All Star Heart.

A Canadian bred daughter of Arch and the Ascot Knight mare Gift of the Heart, the 4-year-old filly has won five of eight since coming to California late last year and joining the McAnally barn.

Owned by Gerald L. Gibbs, All Star Heart has won two in a row and earned her most significant victory when capturing the Grade II Las Palmas – at the Matriarch distance – Nov. 6 at Santa Anita.  She’s won five of 15 overall and has a bankroll of $261,705.

Never Retreat arrives on a roll for Chris Block – who trains the veteran mare for Team Block, which consists of himself, mother Patricia, father David and brother Ryan – for what will be the final start of her career.

The 6-year-old daughter of Smart Strike has won two in a row and three of her last four, including the aforementioned First Lady. She could become the first North American horse to win six graded stakes in 2011 with a victory Friday..

The Kentucky bred has won eight of 19 since the beginning of 2010.

Up In Time will be seeking her third win in her last four starts for owners Lordship Stud and Three Chimneys Racing and trainer Simon Callaghan.

The 3-year-old Noverre filly out of the Inchinor mare Up At Dawn sandwiched wins in the Grade II San Clemente Handicap July 24 at Del Mar and the Grade III Harold C. Ramser, Sr. Oct. 16 at Santa Anita around a seventh place finish in the Del Mar Oaks.

Winner of the Grade III Senorita Stakes May 7 at the Matriarch distance, Star Billing will be trying to end a four race losing streak. Owned by breeder George Krikorian and trained by John Shirreffs, the 3-year-old Dynaformer filly and the Thunder Gulch mare Topliner is 2-for-6 with earnings of $205,067. She is back in California after finishing sixth of eight in the Grade I Queen I Elizabeth Challenge Cup Oct. 15 at Keeneland.

Quiet Oasis stretches out and steps up in class after an authoritative win on the hillside turf course Oct. 15 at Santa Anita. Trained by Ben Cecil, who won the 1998 Matriarch with Squeak, for owner J. Paul Reddam, the 3-year-old Oasis Dream filly out of the Sunday Silence mare Silent Heir has won two of six and earned $62,379.

Madera Castana will make her first graded appearance in a turf race in the United States for Green Grass Stable and trainer Ruben Cardenas.

The 4-year-old Chilean bred daughter of Indy Dancer and the Dancing Groom mare Madera Fragante has won two of 19 and earned $120,278. Both of her wins came in her native country. She is winless in eight starts in California.