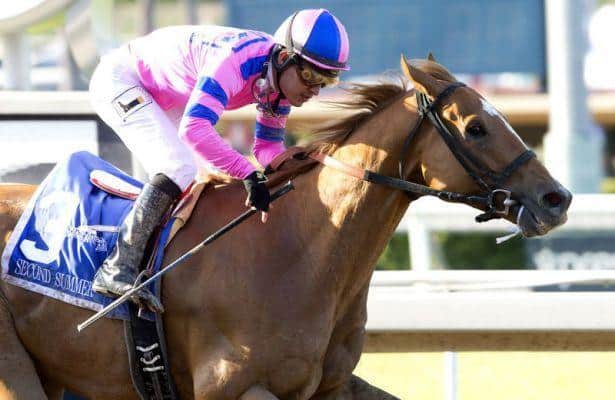 A recent winner of two consecutive allowance races, Second Summer, who broke from post position two in a field of six 3-year-olds and up, sat a joint third into the Club House turn, hugged the rail around the far turn and angled just outside the favorite approaching the quarter pole as he marched to his first-ever stakes win in Santa Anita’s final major steppingstone to the Grade I, $500,000 Gold Cup at Santa Anita going a mile and a quarter on June 25.

“Every single race he has improved a lot and he showed it today,” said Gutierrez.  “Today, he had a good race, he pulled it through and was very game every time I asked him.  I’m very happy with him.”

When asked about returning from the huge disappointment aboard Nyquist at Pimlico, Gutierrez responded, “That’s horse racing.  After the race, everybody has their opinion on everything that happened.  The horse came out of the race good and it looks like we’re going to run in the Belmont.”

"He has an affinity to quicken and his stamina is just amazing…When I saw him at the three eighths pole, he just looked like he was loaded.  It looked like he was going to get boxed in for a second and when Mario made the move to go in-between the two of ‘em (Lieutenant Colonel and Point Piper)…that was just such a great, money move.

“I can’t say enough good things about this horse, he just keeps getting better…We’re so excited (about running in the Gold Cup on June 25).  It could be a fun summer…I’ve never had a colt that was this good, going long on dirt.  I didn’t realize that the Gold Cup was a Breeders’ Cup ‘Win and You’re In’ race.”

With Lieutenant Colonel tiring at the rail late, 2015 Gold Cup winner Hard Aces charged late to grab second by a half length.  Ridden by Abel Lezcano and trained by John Sadler, Hard Aces was off at 5-1 and paid $5.40 and $2.60.

“He ran very well, no complaints at all,” said Larry Benavidez, assistant to Sadler.  “The winner got a seamless trip.  Right now, it’s on to the Gold Cup and we’ll be back to defend our title.”

Retired trainer Mel Stute, who won his first-ever hundred grander 55 years ago with First Balcony in the 1961 Californian at Hollywood Park, was on-hand to present the trophy.