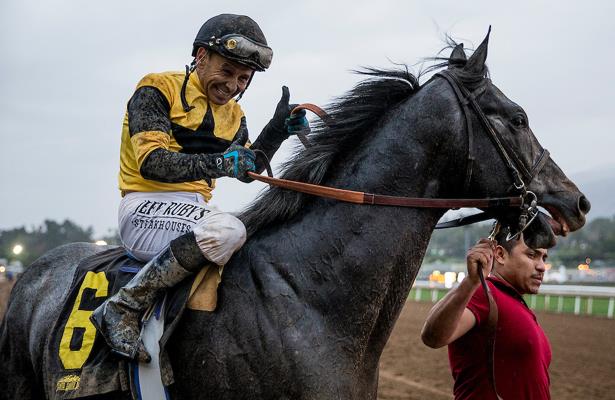 While the injury will count Gunmetal Gray off the Derby trail, connections do not anticipate it is life- or career-threatening. The son of Exchange Rate was said to be in surgery Sunday afternoon.

Gunmetal Gray was back on the work tab after finishing fourth March 16 in the second division of Oaklawn Park's Rebel Stakes (G3). The Jerry Hollendorfer trainee bases in California, and the breeze took place at Santa Anita Park, where a spate of catastrophic injuries led to a temporary halt to racing earlier this month.

Finley said Gunmetal Gray was noticeably off while cooling out.

"There's not much to say. It's just bad timing," he added.

Also campaigned by Hollendorfer LLC and Pearl Racing, Gunmetal Gray won the Sham Stakes (G3) to open his season and ran second to Mucho Gusto in the Robert B. Lewis (G3) before leaving town for the Rebel.

West Point Thoroughbreds has another Derby hopeful in Galilean, who finished third in the first division of the Rebel. His final prep plans are to be decided, Finley said.

Racing is scheduled to resume Friday at Santa Anita amid debate over new rules announced by track owner The Stronach Group regarding a ban on race day medication, including Lasix, and limitations on use of the whip by jockeys.