Gulfstream turf is ready: 17 grass races are scheduled this week 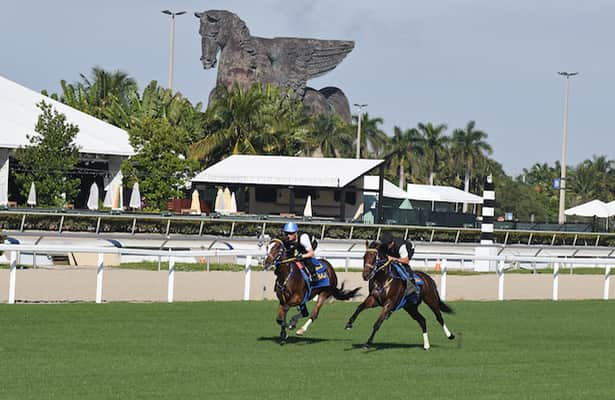 Amid well-publicized problems with the turf courses at Churchill Downs and Fair Grounds this year, Gulfstream Park management sent a couple horses and riders to check out the Florida track’s new grass surface Monday.

Get Paddock Prince picks for the full Gulfstream meet

And they liked what they saw, said Aaron Gryder, a former jockey and senior vice president of racing operations for Gulfstream owner 1/ST Racing. He was aboard Midnight Bella for the trial run in company with Julien Leparoux on Fawning. Both horses are trained by Saffie Joseph Jr.

“We were very happy with it,” Gryder told Horse Racing Nation on Monday. “It was like the horses got over it very well. There's a good pad to it now. It's really got good growth to it. And the weather is cooperating with us right now. And we're excited to get started in just a couple of days on it.”

Gulfstream will have three races on the turf Thursday and Friday, with six grass races scheduled for Saturday and five more Sunday.

“We're going to have a double-rail setting on the weekend, so they'll be able to run in two different lanes,” Gryder said. “They can put a rail in between, it's such a wide turf course. So we'll have room to where you could run two or three on the inside and then two or three on the outside rail as well.”

After his horses worked, Joseph told the Gulfstream Park media team that he also was pleased with the surface.

“Tapeta has been a good filler, but you obviously want to have the turf as an option,” Joseph said. “Fawning worked on it, and she’s going to run on it on Sunday. Midnight Bella is going to run next week. Both of them are going to run on the grass, so it was good to get a work on it.

“It’s a firm turf, but you’re not hearing any noise,” Joseph added. “Sometimes you hear horses rattle, but this has a good cushion. It’s in great shape.”

Gryder said Gulfstream Park stopped racing on the turf course the week of the June 11 Belmont Stakes in New York.

“We gave it so much time and had time for regrowth without any traffic going back and forth over it, whether it was equipment to do different work or horses,” Gryder said. “So just that part alone, just the recovery,” helped improve the course.

“And then, I guess it was late October, early November when (track superintendent Leif Dickinson) over-seeded it. So the base of it is Bermuda, and Bermuda goes sideways, where the grass that you'll see on top grows above it. So the Bermuda ends up being the cushion of the base of it. And then when he over-seeded it, the other grass grows through the Bermuda. So now I think we have it at 3 1/2 inches right now, and so that's definitely helped. It's just got a lot more cushion than it had. Just the fact that it had the time off, and he was able to do things he wanted, we can say it's even all the way around there. There's no spots that I think are any different than the other.”

“What I am excited about is that it's perfectly even and fresh, so we're coming into this meet with the best turf course that we can prepare for,” he said. “And that to me is great. But I think that the fans are going to love betting on the grass. They have always seemed to have more interest in the grass races, and you'll get fuller fields on it, and it gives you a lot of value and options.”

Also contributing to the turf fields is the lack of grass racing at Fair Grounds until at least late December, when the course in New Orleans may have recovered from an autumn drought and the reported leakage of salt water into an irrigation well.

“Obviously now we're going to be extremely full, because it'll be Santa Anita and Gulfstream Park that will be the premier turf tracks that'll be open. Usually we have Fair Grounds as well, and so we will be very busy. We're full here, and I think that fans are going to really enjoy the championship meet, and we're going to have a good product.”

Gryder didn’t want to comment on what might have happened at other properties, only saying, “It's just a shame that they haven't been able to utilize it.”