Gulfstream's new Tapeta track will debut in 'about two weeks' 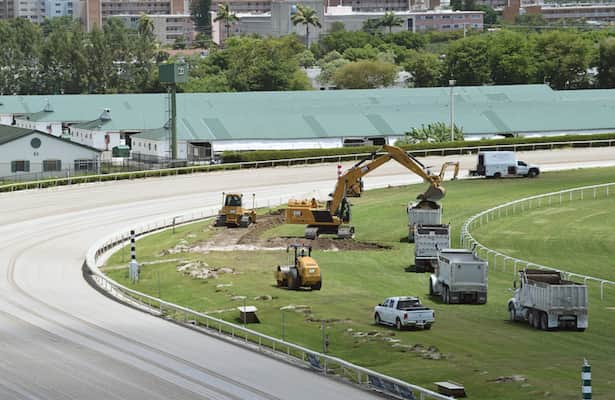 Gulfstream Park will move its turf races to its new Tapeta track when the synthetic surface is ready in about two weeks.

Gulfstream's vice president of racing operations, Mike Lakow, told Horse Racing Nation Thursday that the turf track will be reseeded, and the plan is not to race on it until the Florida track's Championship Meet, which begins Dec. 3. The current meet runs through Nov. 21.

"Everything's gone smoothly from start to finish" with the Tapeta installation, Lakow said. "We expect within about two weeks, we'll have horses get a feel for it, make sure everything is correct. And we're going to start racing on it as soon as possible."

He said Tapeta Footings vice president Joan Wakefield visited the track on Thursday. "She said it looks perfect. The drainage system is complete. And luckily we had no issues. Everything seems to be perfect."

Lakow said there is no schedule for how many races will be run on the new surface.

"Some days we run four turf races, some days six. What we want to do is create a product that the fans appreciate, so I don't want to say we're running five Tapeta, four dirt. Whatever is the best race for the public. We don't want to force any races to be carded that really aren't what we're trying to accomplish."

Lakow expects that races held on Tapeta will include stakes.

"Our stakes schedule for the fall is not completed yet. We had a few turf stakes, written down, penciled in – I think they'll be Tapeta at this point. Unless we feel very comfortable with the turf course and the weather has cooperated. And it comes back at the fullest possible growth, thickness, strength of the root system, and then maybe we'll decide to go a different route."

He didn't want to speculate on the soonest that the turf course might be ready. "I'm guessing, most likely, once we're on Tapeta, we'll wait until the Championship Meet. But I've known this business – things change. And I don't want to say 'absolutely not' to anything."