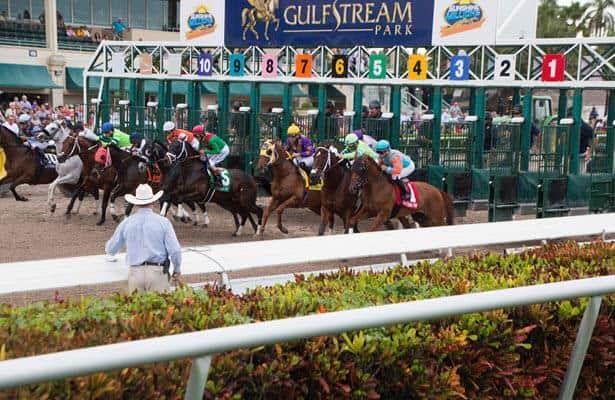 For horseplayers watching the Gulfstream Park track feed on opening day, the words jumped off the screen: “Horses will load at listed post times for all races.”

Post-time drag was dead. To the delight of seemingly everyone, Wednesday’s start to Gulfstream’s “championship” meet featured races actually going off at the listed post times and not several minutes later, as had become the custom in recent years.

According to Gulfstream’s Vice President of Racing Operations Mike Lakow, the elimination of the track’s post-time drag came at the behest of the new management team led by Aidan Butler. A recent arrival at Gulfstream, Butler previously served as head of California racing operations for The Stronach Group, owner of Gulfstream Park.

“Aidan was certainly the one behind it,” Lakow said Wednesday evening. “When I started working at Gulfstream last October I questioned the drag. But it creates handle, absolutely. Today, all I heard were good reports about the post times. I think as fans get more comfortable with things, it will work out fine.”

Handle for this year's lid-lifter did decline from last year’s opener, although it is hardly a like comparison. Last year’s meet opened on a Friday, which is a big difference from the middle of the week. With an average of 8.1 starters per race, handle on Wednesday’s 10-race program was $5,150,348. Last year, with a significantly higher 9.9 starters per race, total handle for 10 races was $7,217,692.

“It’s tough to compare a Wednesday to a Friday, it’s almost night and day," Lakow said. "So not really anything you can draw from that."

The general public was barred from attending opening day and Lakow declined to comment on when that house policy could possibly be changed. However, prior to the start of Wednesday's card, Gulfstream announced on social media that tickets for the Jan. 23 Pegasus World Cup (G1) would go on sale Thursday. The media relations' team at Gulfstream relayed later Wednesday that further details would be provided at that time.

“We’re watching the world and things are changing. All I can say is we want to have fans on track, of course, but we also want Gulfstream to be really safe,” Lakow said. “We’re just going to watch and see how things go. It’s a constantly moving target and we don’t want to make a mistake.”

"Things went very smooth for an opening day," Lakow said. "The horses returned in good order and the turf course got a lot of tremendous input from the jocks, they loved it. As we get deeper into December, the racing is only going to get stronger."