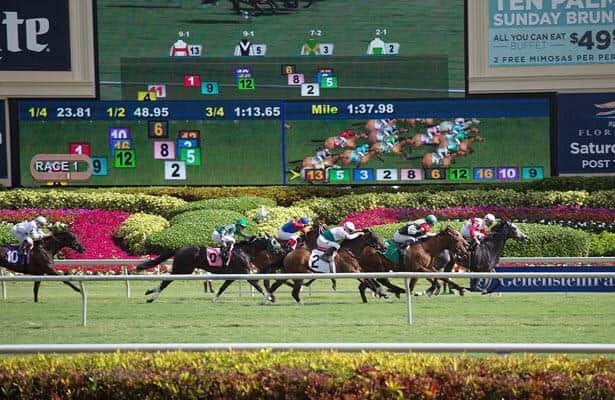 The 2020-21 championship meet at Gulfstream Park gets under way Wednesday for the first of 84 days of Thoroughbred racing.

Racing is set to run through March 27 primarily on a Wednesday-Sunday schedule with a first post set at 12:35 p.m. EST. Under pandemic protocol, racing will be conducted without spectators.

The meet will offer a stakes schedule of 75 stakes, 36 graded, worth more than $13 million in purses.

Jesus’ Team, who finished third in the Preakness and second in the Breeders’ Cup Dirt Mile (G1), is expected to headline the field for the Jewel.

Irad Ortiz Jr. will be back to defend the riding titles he won in 2018-19 and 2019-20. Luis Saez, who finished second behind Ortiz by just one and two wins, respectively, will seek to regain the title he won the two seasons prior.

Ortiz is looking to become just the second jockey to win three outright riding titles at the championship meet. He would join Jorge Chavez, who accomplished the feat from 1998-99 to 2000-01.

Todd Pletcher, who regained his training title last season after missing out in 2018-19, will seek his 17th championship meet title. Prior to being temporarily dethroned in 2018-19 by Jorge Navarro -- who has since been federally indicted on horse-doping charges -- he had won the previous 16 trainers titles.

“You try to just focus on placing your horses properly and hoping they run well,” Pletcher said, explaining his success at Gulfstream. “I think when the streak was still intact it was perhaps a little more meaningful, because if you have a streak going for that long the chances of ever duplicating that are pretty remote. But, we’ll focus on doing the best we can without being overly concerned about whether or not that ends up leading to a meet title.”

“We’re extremely optimistic for a fantastic championship meet,” said Mike Lakow, vice president of racing at Gulfstream. “The barns are full with many of the top trainers, including some wintering here for the first time. We’re also happy with the way our turf course has thrived during the extreme rainy season here this fall.”

The 20-cent Rainbow 6 will again feature prominently on Gulfstream’s wagering menu. It will span the final six races each day, kicking off Wednesday with a $50,000 jackpot guarantee.

In the featured eighth race on opening day, Shadwell Stable’s Ashaar is scheduled to make his first start for Pletcher in a six-furlong sprint for 3-year-olds and up. The 3-year-old son of Into Mischief has not seen action since finishing off the board in last winter’s Mucho Macho Man at Gulfstream. Ournationonparade, the only stakes winner in the field, will make his first start since finishing fifth in the Sept. 5 Smile Sprint (G3) at Gulfstream.