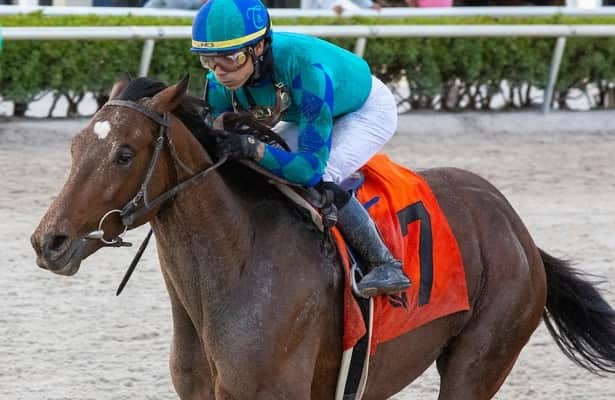 That pressure continues Saturday at Gulfstream Park, where Greatest Honour leads a field of 10 into the $300,000 Fountain of Youth Stakes (G2). Post time for the 1 1/16-mile event is scheduled for 6:10 p.m. EST.

"He ran awfully well, he’s trained well since then, so this is just another step," McGaughey told Carolyn Greer this week in a Horse Racing Nation Barn Tour interview. "We feel pretty confident he’s going to run good.”

The Fountain of Youth pays its winner 50 Kentucky Derby points, enough to essentially clinch a spot in the starting gates for the First Saturday in May. McGaughey is no stranger to using the race as a springboard to Churchill Downs.

Orb won the 2013 Fountain of Youth (G2), stayed at Gulfstream to take the Florida Derby (G1) and then gave McGaughey his first Kentucky Derby victory. The Hall of Fame trainer also won the 2019 Fountain of Youth with Code of Honor, who two months later was placed second in the Derby.

Greatest Honor is the 9-5 favorite for the 2021 version of the Fountain of Youth. Jockey Jose Ortiz stays aboard the 3-year-old Tapit colt, who has won back-to-back starts after starting his career 0-for-3.

The next choice on the board at 7-2 is a wild card in Fire At Will. The 2020 Breeders’ Cup Juvenile Turf hero is testing the Kentucky Derby trail for trainer Mike Maker and figures to have a big shot if his turf form carries over to the main track.

Here is a look at the 2021 Fountain of Youth Stakes field (trainer and jockey in parentheses) with morning-line odds:

TimeformUS’ pace projections show Prime Factor going out to the lead under jockey Irad Ortiz Jr., followed closely by Drain the Clock. Favorite Greatest Honour rallied from seventh place in the Holy Bull and is projected to settle into that part of the field again Saturday.

With the Southwest twice postponed by weather, Essential Quality stayed in training several hours south at Fair Grounds. The Tapit colt finally shipped north Wednesday and puts his 3-for-3 record to the test Saturday under jockey Luis Saez.

Jackie’s Warrior (8-5) finished fourth in the Breeders’ Cup Juvenile as 9-10 favorite and takes another shot at Essential Quality here. Trained by Steve Asmussen, he scored Grade 1 victories in Saratoga’s Hopeful and Belmont’s Champagne, and now looks to reestablish himself on the Derby trail at Oaklawn.

Highlighting other entries is Spielberg (9-2), a Grade 2 winner who ships in from Southern California for trainer Bob Baffert.

Here is a look at the 2021 Southwest Stakes field (trainer and jockey in parentheses) with morning-line odds:

TimeformUS notes that the pace setup could favor a horse on or near the early lead. All three of Jackie’s Warrior’s stakes wins have come in front-running fashion, although those victories were also all at one turn.

For more information on both the Fountain of Youth Stakes and Southwest Stakes, visit HRN’s free past performances page.

TVG will carry on-site coverage Saturday of both the Fountain of Youth Stakes and Southwest Stakes. Caton Bredar will report live from Oaklawn Park, while Gabby Gaudet, Joaquin Jaime and Caleb Keller will all broadcast from Gulfstream Park.

Reinier Macatangay expects Drain the Clock to use his speed to stake out a lead Saturday in the Fountain of Youth. Can he build enough of a cushion to hold off an expected late charge from Greatest Honour?

Fire At Will has already proven himself on a big stage, upsetting last year’s Breeders’ Cup Juvenile Turf at 30-1 odds. Brian Zipse writes about the Mike Maker trainee who now tackles the Kentucky Derby trail.

Keeler Johnson identifies 10 of his watch list runners in action this weekend at Gulfstream and Oaklawn. The list includes a trio of Fountain of Youth starters.

Ross and Tamulonis also go head-to-head handicapping the Southwest Stakes. Tamulonis likes Essential Quality to maintain his undefeated ledger, while Ross notes Spielberg – who has made three starts since either Essential Quality or Jackie’s Warrior last appeared – has the benefit of recent races.

The Southwest is one of several Kentucky Derby preps left to be run over the next 1½ months between Arkansas, Kentucky and Louisville. Essential Quality and stablemates Caddo River and Mandaloun give trainer Brad Cox a strong hand in the region’s Derby picture.

This week on Horse Center, hosts Zipse and Matt Shifman make their picks for both of Saturday’s Kentucky Derby preps.

Courtesy of the NTRA, here is a look at some of the other graded stakes taking place Saturday across the country.

We Got This Stables’ I Get It will go for her first graded-stakes victory in Saturday’s Herecomesthebride, a 1 1/16-miles turf stakes for 3-year-old fillies. I Get It has won four of her last five starts by a combined 14¾ lengths in going-away fashion while demonstrating an explosive late kick and a distinct fondness for the Gulfstream turf course. She broke through with a five-length maiden victory while not being equipped with the blinkers she wore in her first two unsuccessful starts. She came right back to capture a pair of optional claiming allowances at Gulfstream Park West before lacking her usual late kick in a fourth-place finish in the Jan. 2 Ginger Brew at Gulfstream. She bounced back with a sharp three-length optional claiming allowance score in her most recent start.

It’s all about threes when trainer Mike Maker sends out the trio of Aquaphobia, Temple and Tide of the Sea in search of a third consecutive victory in Saturday’s 1 3/8-miles Mac Diarmida for older turf horses. Aquaphobia became a Grade 1 winner in last summer’s United Nations at Monmouth, coming five starts since being claimed for $62,500 last winter at Gulfstream and run at the Mac Diarmida distance. This will be the seventh consecutive race facing graded company for Aquaphobia, who exits an eighth-place finish in the Pegasus World Cup Turf (G1).

After two uncharacteristic off-the-board performances, Fancy Liquor steps right back into graded stakes company Saturday in the 54th running of Canadian Turf Stakes. Fancy Liquor, bred and owned by Louisville Ky.-based Skychai Racing and partners, had a very good 3-year-old season in 2020 for Maker. The son of Lookin at Lucky won three of eight starts – topped by a victory in the American Turf (G2) – and earned $497,187. His run of seven straight in-the-money finishes to begin his career ended with a fifth in the Tropical Park Derby at Gulfstream. In his most recent start, he was sixth in the Tampa Bay Stakes (G3).

Phipps Stable and Claiborne Farm’s Performer, who captured the Fred W. Hooper (G3), will seek to produce an encore performance in Saturday’s Gulfstream Park Mile. Trained by Hall of Famer Shug McGaughey, the 5-year-old son of Speightstown is slated to top a field of seven older horses in the one-turn mile event. Joel Rosario worked out a winning trip aboard Performer after breaking from the rail post position in the Hooper, also run at a one-turn mile. Pinned down on the rail along the backstretch, Performer was swung to the outside on the turn into the homestretch and out-battled Eye of a Jedi to the wire to win by a neck.

Multiple graded stakes winner Owendale aims to halt a five-race skid when he faces six challengers in the 1 1/16-mile Razorback. Trained by Brad Cox, Owendale hasn’t visited the winner’s circle since taking the Blame Stakes at Churchill Downs last May 23 but did finish third last time out in the Clark Stakes (G1) on Nov. 27. Among the top challengers the son of Into Mischief is set to face is Mystic Guide, winner of the Jim Dandy Stakes (G2) last year and runner-up in the Jockey Club Gold Cup (G1) last October.

Grade 1 winner Got Stormy will begin her fifth and final season of racing Saturday in the one-mile Honey Fox for fillies and mares 4 and up. Got Stormy will be returning to Gulfstream for the first time since winning an optional claiming allowance in March 2019. It is where the daughter of Grade 3 turf-winning mare Malabar Gold broke her maiden in her third lifetime start in February 2018. Given a freshening following her fifth-place finish in the Breeders’ Cup Turf Sprint on Nov. 7, Get Stormy joined trainer Mark Casse’s string at Palm Meadows, where she has breezed five times since mid-January.

Gary Barber, Wachtel Stable and Swilcan Stable’s Vequist, the champion 2-year-old filly of 2020, is set to launch her highly anticipated sophomore season against 11 rivals in Saturday’s Davona Dale. Vequist, the 7-5 favorite in the Davona Dale, was the first champion for her trainer, Parx-based veteran Robert “Butch” Reid Jr., who is approaching his 800th victory in a career that began in 1985. Vequist will be cutting back for her first race since a two-length victory in the 1 1/16-mile Breeders’ Cup Juvenile Fillies on Nov. 6 at Keeneland, a span of 114 days.

Heavenly Curlin, already a graded stakes winner on Woodbine’s synthetic surface, will have another test on grass Saturday in The Very One Stakes. Though her pedigree suggests that she ought to fancy turf, Gary Barber and John Oxley’s 4-year-old filly, a $625,000 yearling purchase, is winless in her two tries on the surface, both at Gulfstream. In her most recent start, she was fifth in the 1½-mile La Prevoyante (G3) on Jan. 23. She will cut back in distance in The Very One to 1 3/16 miles.