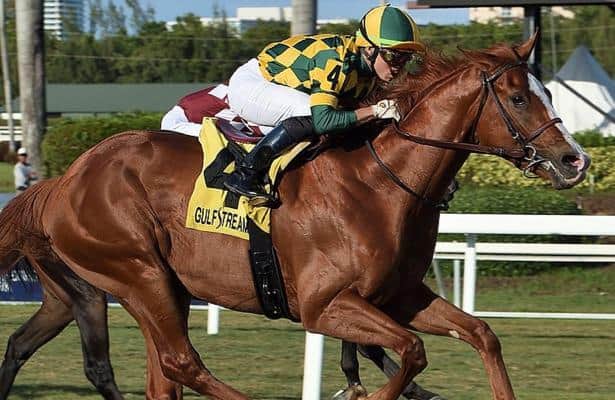 Otter Bend Stables’ Gufo, making just his fourth career start and first in a stakes, stretched his win streak to three races with a popular and impressive 1 ½- length triumph in the $75,000 English Channel.

Gufo ($3.40), a half-brother to multiple graded-stakes-winning millionaire Hogy, has put together his win streak entirely at Gulfstream, breaking his maiden in December before defeating winners in March during the 2019-2020 Championship Meet, the latter giving trainer Christophe Clement his 2,000th career victory.

Gufo and jockey Irad Ortiz Jr. were unhurried near the back of an 11-horse field as 35-1 long shot Justinthenickotime, racing first off the claim for trainer Mike Maker, raced through a quarter-mile in 23.41 seconds, pressed to his outside by Grade 1-tested Proven Strategies and Island Commish, winner of his last three races including the Kitten’s Joy (G3) on Jan. 4 at Gulfstream.

Justinthenickotime yielded the top spot to Proven Strategies after a half-mile in 47.01, with Island Commish continuing to track the top pair three wide. Meanwhile, Ortiz began to roll on typically late-running Gufo and started picking up horses.

“He acts like a nice horse,” Ortiz said. “He waits for you to call. He relaxes so well. He’s like an old horse. He knows what he’s doing.”

Gufo moved up to mid-pack midway on the turn but still found himself behind horses until finding a seam at the top of the stretch, then accelerated with a steady run down the center of the track to catch Proven Strategies and win in a sparkling 1:39.70 over the firm turf course.

“He’s always demonstrated he has a terrific turn of foot and, to be honest, he’s been improving all the time,” assistant trainer Miguel Clement said. “Even since his last race he’s picked it up another notch and as seen today, he was incredibly impressive.

“Going into this race, the only concern that we would have had is that maybe the distance would be a touch short for him. We’re convinced that he would actually stay and go further. He’s incredibly exciting. I don’t know what is next because of the schedule and everything taking place in racing, but he is definitely a horse with a big future, without a doubt.”