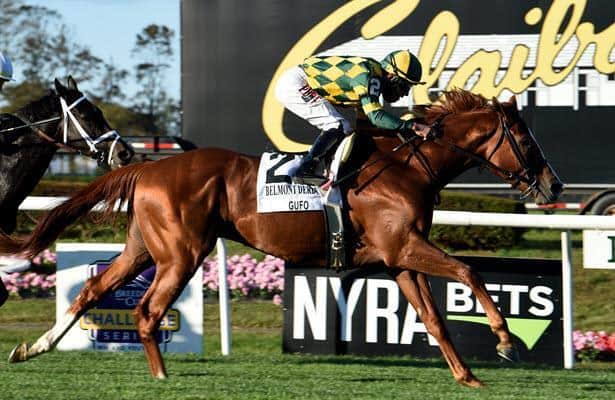 Otter Bend Stables' Gufo punched his ticket to next month's Grade 1 Breeders' Cup Turf with an emphatic win in Saturday's Grade 1, $250,000 Belmont Derby Invitational for sophomores on the Belmont Park grass to give the upstart stable their first Grade 1 victory with the only horse they currently own.

Typically run around the July 4th holiday at Belmont, the Belmont Derby, a Breeders' Cup "Win and You're In" qualifier for November at Keeneland, was moved to the fall meet this year. That allowed the later-developing Gufo to take his shot at the prestigious race, carrying his banner into this year's renewal on the heels of a runner-up finish in the Saratoga Derby Invitational on August 15 at the Spa.

The complexion of the Belmont Derby changed dramatically Saturday when Saratoga Derby-winner Domestic Spending was scratched after spiking a temperature earlier in the week, leaving Gufo as the clear favorite in the 1 1/4-mile event on Belmont's inner turf course, which featured a field of eight 3-year-olds vying for an elusive Grade 1 win.

Breaking from post 2 under Junior Alvarado, who rode Gufo for the first time on Saturday and was his fifth jockey in as many races, not much changed for the son of Declaration of War in terms of running style as he assumed his usual position near the back of the pack.

It was longshot Mo Ready that went out to lead the field through tepid splits of 24.67 seconds over firm going for the opening quarter-mile, 50.61 for the half, and 1:15.56 for three-quarters as Moon Over Miami sat perched to his outside in second and his uncoupled stablemate No Word tracked in third along the inside.

Positions remained mostly unchanged down the backstretch, save for No Word splitting the two leaders and wresting control of second away from Moon Over Miami as Gufo moved up incrementally through the pack while hugging the fence. Turning for home it was still the pair of Todd Pletcher-trained runners, Mo Ready and No Word, running one-two after a mile in 1:39.26, but Gufo loomed just behind them looking for a clear path to unleash his rally.

Needing to be tipped out only a path or two for running room in upper stretch by Alvarado, the race was over in a matter of strides as an uncovered Gufo surged by the frontrunners and on to a one-length victory, which stood following a steward's inquiry for possibly impeding Moon Over Miami in the stretch run. There was no charge, earning Gufo's fifth trip to the winner's circle in his past six starts.

"I had to do my homework," said Alvarado. "He's not a hard horse to ride, but it can be a little tricky with him to make sure he doesn't fall too far back or it takes him too long to get home. I kept him between horses; he was paying attention to everything and he was focused. When I turned for home, I knew I had a lot of horse under me."

"He won well," said Clement, who captured the Belmont Derby for the first time on Saturday. "I thought he had a great trip from Junior [Alvarado] and when he asked him to quicken, he really quickened well in the stretch. He's a good horse. If you look at all his races this year, he's been running well all year round. I know he got beat last time but he actually ran a winning race when you look back at it."

The third-place finisher from the Saratoga Derby, No Word, had to settle for a minor award again with a runner-up finish in the Belmont Derby that saw him 1 ¾ lengths in front of Mo Ready on the wire.

It was another three-quarters of a length back to Ajourneytofreedom in fourth, who was followed closely by Pixelate. Moon Over Miami, South Bend, and Venezuelan Hug completed the order of finish.

As for whether or not Gufo will take advantage of his all-expenses paid trip to the Breeders' Cup Turf to take on his elders for the first time in his career, Clement said he was non-committal in the wake of his breakthrough victory.

"I'm not sure," Clement said. "We'll have to check with the owner and see how he comes out of it. There's also the Hollywood Derby [Grade 1 on November 28 at Del Mar] going a mile and an eighth."