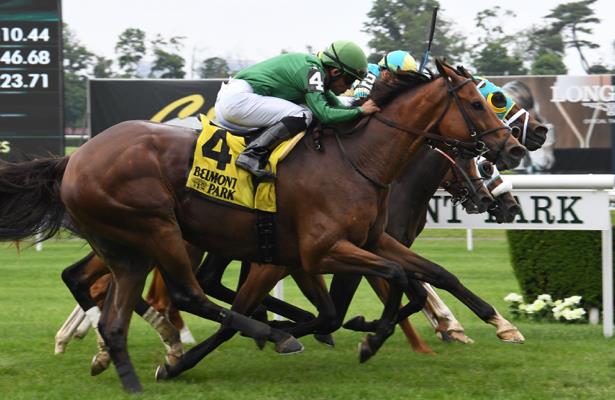 Castleton Lyons Farms' Gucci Factor got his nose down at the wire in a blanket photo finish to win Sunday afternoon's Grade 3, $300,000 Poker, where the top-five finishers all finished within a nose of one another.

Jockey Joel Rosario placed Gucci Factor in seventh as graded stakes winner Dr. Edgar was sent to the front under Dylan Davis, completing the opening quarter mile in 23.71 seconds with 9-5 post time favorite Clyde's Image running to the outside of Krampus in second.

With the half-mile in 46.68, Gucci Factor remained in seventh as Clyde's Image inched his way closer to the front. Gucci Factor made a five-wide move around the far turn and was under urging from Rosario, with Dr. Edgar still in command with three-quarters of a mile in 1:10.44.

In the final furlong, Clyde's Image moved ahead of Dr. Edgar but was confronted by a trio of horses inside the sixteenth pole. Gucci Factor made a late bid in tandem with Hembree and Krampus, with Dr. Edgar resurgent along the rail. As all five horses hit the wire together, it was Gucci Factor, to the far outside, who got his nose in front.

Gucci Factor completed the one-mile journey over the Widener turf course in 1:32.54. Two paths to his inside was Hembree who finished second, a nose the better of Krampus.

Clyde's Image was pulled up past the wire and walked onto the equine ambulance under his own power. Dr. Anthony Verderosa, NYRA's Veterinary Department Director, advised the horse incurred a bowed tendon to his right foreleg.

The victory was the fourth stakes win of the meet for Rosario, who spoke highly of Gucci Factor's heart and reliability.

"He was trying really hard and running at the end, I'm just glad we got close at the wire," Rosario said. "He showed a lot of heart. He's there for you all the time. He's a real honest horse. He just loves to run. I thought he got the jump in the last minute but I wasn't sure [awaiting the photo finish result]."

Trained by Christophe Clement, Gucci Factor is unbeaten in three starts over the Widener turf at Belmont Park. Last out, he defeated fellow New York-breds in the Kingston on May 27.

Gucci Factor is by Gio Ponti, who also was trained by Clement and owned by Castleton Lyons Farm.

"He's an anxious kind of a horse. He loves Belmont Park and he never stopped getting better," Clement said. "It's nice when the patience pays off. He's also a son of Gio Ponti, which is always fun. You could see he was coming with run toward the wire and watching Joel not having to use his whip. You know he thought he was going to get there. A very tight race and they all ran well."

The victory brought his career earnings up to $443,450 after cashing the winner's share of $165,000. He has won 7-of-14 career starts, which include victories on both dirt and turf.