Guarana battles back to edge Mia Mischief in Madison 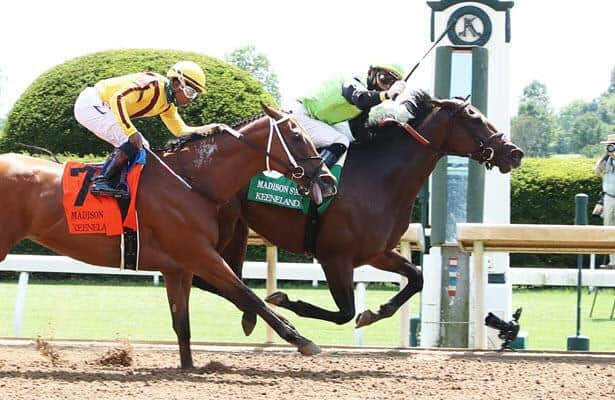 Grade 1 winners Guarana and Mia Mischief put on a show in the Grade 1, $250,000 Madison Stakes (G1), with Guarana re-rallying in the stretch to prevail at Keeneland Race Course on Saturday and provide trainer Chad Brown with a 100th career Grade 1 win.

With Jose Ortiz in the irons, Guarana ushered the field through fractions of :22.95 and :45.92 for the opening half mile with Mia Mischief pressing to the outside. At the top of the stretch, Mia Mischief surged past Guarana and looked poised to upset the odds-on favorite. But battling back along the inside came Guarana, who collared Mia Mischief in the final 100 yards to prevail by about a neck on the wire.

Guarana paid $3.00 while completing seven furlongs on a fast track in 1:21.70. Mia Mischief was followed by Bell's The One and Wildwood's Beauty to complete the superfecta.

“It unfolded how I feared with Mia Mischief having the better post on the outside of us and being able to hound us a bit," Brown said. "I thought turning for home that the post really did us in this race, and I started to get a little disappointed. But I could see at the sixteenth pole that she was finding her stride again and I think 7 (furlongs) is maybe a tick far for the other filly. We were able to come back on her."

WATCH the replay of a thrilling edition of the Madison (G1) at #Keeneland, as favored Guarana gets the win over top mare Mia Mischief to deliver trainer Chad Brown @TheRealChadCBr1 his 100th career Grade 1 win. pic.twitter.com/xbvRWSSPKe

Bred by Three Chimneys Farm and owned in partnership with Hill 'n Dale, Guarana is a 4-year-old daughter of Ghostzapper. She was a smashing debut winner at Keeneland last April and came right back to tally a pair of Grade 1 wins in the Acorn Stakes at Belmont and Coaching Club American Oaks at Saratoga.

Guarana closed last season with a second to Street Band in the Cotillion Stakes (G1). She prepped for the Madison with a 5 1/4 length win in a high-level allowance at Churchill Downs in her seasonal bow on June 4.

As for Brown, he called 100 Grade 1 wins to be among his greatest feats in training.

“It’s right up there near the top. It’s a whole body of work from 12½ years now of training," Brown said. "It has to do with my team of co-workers, owners and horses both present and past. They all contributed to the 100 Grade 1s. God willing if everything stays intact, we’ll work on the next 100. But we’re going to enjoy this for now.”