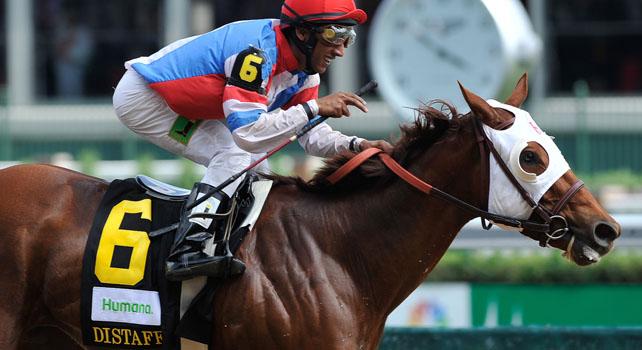 It was never in Mandy Pope’s plans to race Groupie Doll in Sunday’s $200,000 Hurricane Bertie (G3) at Gulfstream Park.

A subsequent decision to run the Eclipse Award-winning mare one more time in the Cigar Mile (G1), in which she experienced a rough trip during a fourth-place performance, also didn’t turn out as planned. “It was horrible and I hated to end her career like that. It was cold, not a fun day over all,” Pope said. “I figured down here with the nice weather, people will be able to be outside and see her and enjoy her. Hopefully, it will be a grand way for her to have her last race.”

Groupie Doll, who will be ridden by Rajiv Maragh, is expected to be the odds-on favorite to conclude her sterling career in the 6 ½-furlong Hurricane Bertie, which attracted a field of seven fillies and mares.

“It’s not about the money. Mandy really does care about her horses,” said Bradley, who bred the 6-year-old daughter of Bowman’s Band in partnership with his father, Fred. “On paper, Groupie Doll looks like she should win, but there’s a reason they put them all in the starting gate. We still need things to go well.”

Pope formed a special attachment to Groupie Doll at the Keeneland November Sale before even Bradley knew it.

“I was trying to hide from Buff around the corner, and I saw her stick her head out and people were giving her peppermints. I said, ‘Hmmm.’ Then they took her out to show her to some people and she was so kind. I said, ‘Oh, Dear,’” recalled Pope about the sudden impulse to add Groupie Doll to her high-powered, high-profile broodmare band. “I just watched her a little bit, then I asked him to bring her out for me and I just kind of fell in love with her. She’s pretty awesome.”

Groupie Doll has, indeed, been awesome during her career, in which the two-time Eclipse champion female sprinter has earned $2.5 million while capturing eight stakes.

“Although this is going to be her last start and we’ll hate to see her go, we’re really excited to see her run Sunday,” said Bradley, who had campaigned Groupie Doll with his father and longtime clients Carl Hurst and Brent Burns before selling her at auction to Pope.

The entries of Wildcat Lily and Jamaican Smoke in the Hurricane Bertie are expected to provide a solid pace for Groupie Doll, whose best races have been from off the pace. The Manny Azpurua-trained Wildcat Lily set the pace in the Grade 1 Prioress before coming up just a quarter of a length short of victory. The Eddie Kenneally-trained Jamaican Smoke is also Grade 1 stakes-placed after setting the pace.

Heart Stealer has won both of her Gulfstream starts since being transferred to trainer Marty Wolfson, winning an entry-level allowance by 10 ½ lengths and a late-closing triumph by a neck in the six-furlong Sugar Swirl (G3) on Dec. 14.

Five Star Momma is a multiple-stakes winner who is coming off a second-place finish in a Laurel stakes on Dec. 28. My Due Process and Distortion round out the field.