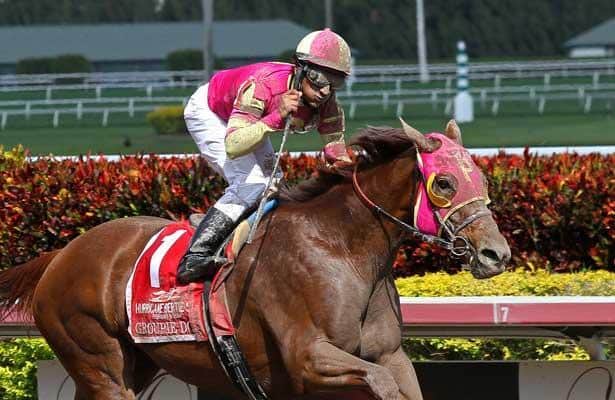 Groupie Doll, who finished off her brilliant career with a spectacular seven-length victory in Sunday’s $200,000 Hurricane Bertie (G3) at Gulfstream Park, was boarded on a van bound for Ocala just before 10:30 Wednesday morning.

The two-time Eclipse Award-winning champion, who is scheduled to be prepared at GoldMark Farm for her new career as a broodmare, got an emotion-charged send-off on her new adventure by trainer Buff Bradley, longtime exercise rider Jada Schlenk and groom and assistant trainer Matt Hebert. “When she gets there, they’ll evaluate her and see where she is in her cycle. She hasn’t shown any signs of being in heat here – I’ve kind of watched for that. Right now we don’t think she’s cycling, but they’ll check her out,” Bradley said. “What they like to do is keep her in light training, like jogging a little bit, then they’ll do the under-lights thing. When she’s ready, she’ll ship to Kentucky. I believe, when the time is right, she’ll go to Timber Town Farm.”

Bradley’s home-bred 6-year-old mare, who was purchased at auction by Mandy Pope for $3.1 million a few days after her second straight Breeders’ Cup Filly & Mare Sprint, is scheduled to be bred to Tapit.

“I’m sad, but, at the same time, I feel blessed that I’ve had her all this time and even having her after the sale,” said Bradley, who campaigned the daughter of Bowman’s Band with his father, Fred, and longtime clients William Hurst and Brent Burns. “I’ve already said good bye to her like three times, so I’m kind of getting used to it. It’s not like she’s gone forever. I’ll get to see her whenever I want to.”

Pope purchased Groupie Doll as strictly a broodmare before making the decision to give her one last race in the Cigar Mile (G1) at Aqueduct on Nov. 30. After finishing a troubled fourth against the boys, Pope opted to give her one last chance to go out a winner in the Hurricane Bertie.

Breaking from the rail post position, Groupie Doll got away very slowly to trail her six rivals by open lengths along the backstretch. After catching up with the pack leaving the backstretch, she swooped around the field on the turn and sprinted away to the finish under a hand-ride by Rajiv Maragh. Groupie Doll ran 6 ½ furlongs in 1:14.68, just off Forest Danger’s 2005 track record of 1:14.44.

“It was one of her best races, the way she did it. You could see her winning by a couple of lengths and doing what she needed to do, but the way she did it was remarkable,” Bradley said. “Boy, it was like she was showing off.”

Bradley said the crowd reaction to Groupie Doll’s career finale made it all the more memorable.

“Walking up there before the race, Mandy was with her, and everyone is wishing her luck. And after the race, the place went crazy. I remember walking Mandy down the steps, the crowd was so loud as Groupie Doll was coming back,” Bradley said. “When she made that Arazi-like move, it even got to me, and I’ve been with her a long time. Everyone got pumped up.”In the Hurricane Bertie, Groupie Doll registered her 12th career victory, including her eighth graded-stakes success, pushing her bankroll to $2,648,850 with the $120,000 winner’s share of the purse.

“It’s sad when a special horse leaves your barn,” Bradley said, “but I think we all enjoyed it while it was happening. That’s the main thing.”