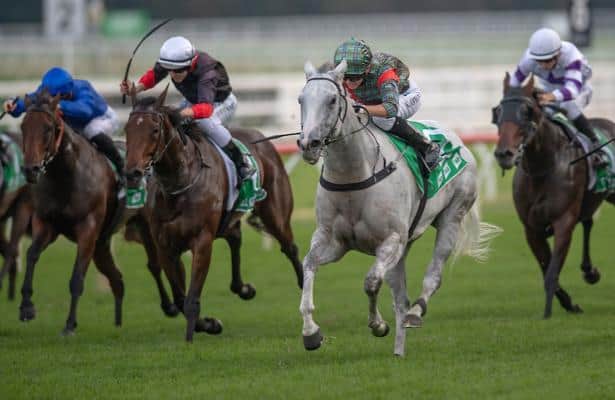 Friday night’s Group 1 feature in Brisbane, Aus., the Doomben 10,000, will be impacted by a venue change and an “equipment” change – the latter drawing parallels with Redzel, the first winner of The Everest, the world’s richest turf race.

The AU$1 million Doomben 10,000 is the eighth on a nine-race card from Eagle Farm (AUS-C) in my home town of Brisbane, which currently holds the nation’s racing spotlight heading into the southern hemisphere winter. First post is 9:48 p.m. EDT.

The Doomben 10,000 (six furlongs at weight-for-age) carries the name of one of Brisbane’s two racetracks, but heavy rain this week has forced the transfer of the program from Doomben to Eagle Farm.

Ironically, the two tracks are directly across the street from each other, yet the difference in drainage is significant due to the recent investments made in the Eagle Farm turf surface.

“10,000” wagering is spearheaded by Mazu (8-5), for the father-son training team of Peter and Paul Snowden.

The 2017 Doomben 10,000 was the initial Group 1 win for the Snowden-trained Redzel, who would go on to capture the first two runnings of The Everest. The Snowdens hope this year’s 10,000 will serve as a similar springboard for Mazu, who was this week confirmed as Arrowfield’s runner in The Everest for the next two years.

Parallels between Redzel and Mazu also include majority ownership and racing silks, but the overriding similarity is the decision to geld both horses.

Peter Snowden philosophizes about the procedure that cost Redzel’s owners a lucrative stud deal, following his AU$16 million in racetrack earnings: “There’s no point asking what would have happened if he was a colt, because it wouldn’t have happened if he was. Redzel would get too aggressive, then he’d get too far back; there wasn’t one run similar to the next.”

Mazu won two of his first six starts, but Snowden explains “his racing manners were poor; he was a highly-strung horse who needed this procedure to bring him back down a peg or two.”

Since undergoing the “ultimate equipment change,” Mazu has reeled off four wins, culminating in a Group 2 victory during The Championships at Randwick a month ago.

“It is there to see in his racing now,” Snowden continued. “He is nice and relaxed, an on-speed runner who conserves his energy, where it wasn’t happening before.”

Such stories evoke memories of my favorite racehorse, Kingston Town, who ignited Australian racing in the late 1970s and early 1980s with breathtaking, record-setting performances. Kingston Town was gelded after finishing stone, motherless last in his career debut.

The Doomben 10,000 is supported by the G3 Rough Habit Plate (Race 7), principal prep for the May 27 Queensland Derby, which has received a massive boost in purse money from AU$600,000 to a million dollars.

The 10,000 and Queensland Derby are among seven Group 1 races in the coming month of Brisbane’s “Winter Racing Carnival.” Additionally, the “Q22” has been granted Group 2 status after last year’s inaugural running was won by topliner Zaaki.

The AU$1.2 million Q22 is part of the June 10 card that includes Queensland’s signature race, the Stradbroke Handicap.

The Eagle Farm card (AUS-C) will be broadcast live on TVG this Friday night (First Post: 9:48 p.m. EDT) alongside cards from Scone (AUS-A), Eagle Farm (AUS-C) and Gold Coast (AUS-D). All races will be live-streamed in HD on the new Sky Racing World App, skyracingworld.com and major ADW platforms.

Fans can get free access to live-streaming, past performances and expert picks on all races at skyracingworld.com.