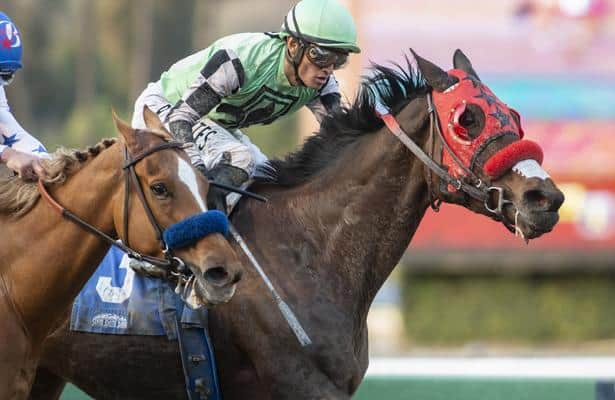 When you’re hot you’re hot. Not just according to the late Country Music star Jerry Reed, but with horses the same applies, as evidenced by Queen Bee to You’s thrilling nose victory in Saturday’s Grade 3, $200,000 La Canada Stakes at Santa Anita Park.

Trained by Andrew Lerner and ridden by Ruben Fuentes, the California-bred Queen Bee to You got a mile and one sixteenth in 1:44.36 while registering her second consecutive Grade 3 win and her third consecutive stakes victory dating back to Nov. 17.

Part of a four-horse scrum into the first turn, Queen Bee to You seemed rank at the rail as the field turned up the backside. With early leader Der Lu drifting out a bit leaving the five furlong pole, she engaged for the lead and prevailed in one of the most exciting finishes of the new year.

“The pace was a little slow and that’s why she was pulling,” said Fuentes, who guided her to a 3 ½ length triumph in the Bayakoa Stakes (G3) at Del Mar on Dec. 8. “Once she made the lead, she relaxed real nice.  My plan was to angle outside and put the pressure on the other filly, but we ended up inside and she fought back.”

QUEEN BEE TO YOU gets the win over Der Lu in an exciting edition of the La Canada Stakes @SantaAnitaPark making this her 3rd straight stakes victory! pic.twitter.com/YcTHp8t8R2

“She has been training so well, she’s coming into each race so happy and doing extremely well,” said Lerner, who registered his first Santa Anita graded stakes win Saturday and took over Queen Bee to You’s training six starts back on June 29, 2019. “The plan wasn’t to be that close, but in the paddock, she was so much on the muscle, I told Ruben, ‘She’s not gonna let you hold her back this time.’  So I got a little nervous that he wasn’t able to get outside, but what a brilliant ride by Ruben…

“She’s just one of those gritty mares that wants to win. She’s just all heart and you gotta love horses like that. It’s unbelievable, just to saddle next to guys like Bob Baffert, Richard Mandella and Richie Baltas, guys I’ve looked up to growing up and going to the races. It’s incredible to be in the same paddock with them, but to be standing here in the Winner’s Circle, it means a lot.”

Der Lu, who slowed down the early pace in masterful fashion under Drayden Van Dyke, was off at 7-2 and paid $4.20 and $3.60 while finishing two lengths in front of longshot Zusha.

Breaking from post position two, Zusha, who was ridden by Tiago Pereira, stumbled badly leaving the gate, but was  quickly into contention about three quarters of a length off of the lead around the Club House turn. In a big effort, she finished a head in front of Kaydetre and paid $5.00 to show.