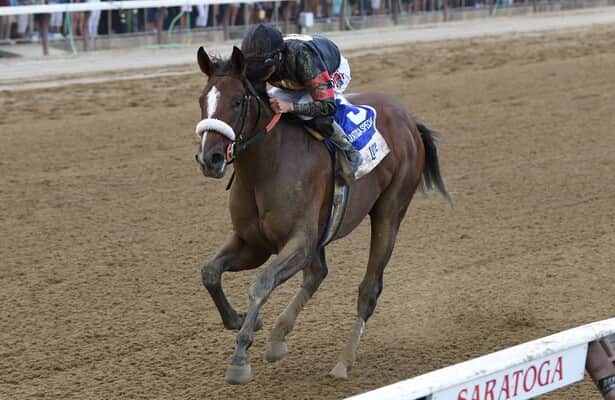 The bay son of Hard Spun will be making his first appearance since a runner-up effort in the Big A’s six-furlong Fall Highweight (G3) on Nov. 28.

Trained by Jimmy Jerkens, Green Light Go enjoyed a successful juvenile campaign, breaking his maiden at first asking with a wire-to-wire win sprinting 5 1/2 furlongs at Belmont Park. Stretching out to 6 1/2 furlongs in his next outing, Green Light Go captured the Saratoga Special (G2) at Saratoga Race Course by a convincing 3 3/4 lengths in his stakes debut.

The bay’s first go at a one-turn mile came with a runner-up effort in the Champagne (G1) to wrap up his juvenile year, finishing four lengths behind eventual Belmont and Travers winner Tiz the Law. Green Light Go then hit the board in both of his sophomore starts, finishing third in the Swale (G3) and second in the Roar, both at Gulfstream Park.

After an eight-month layoff, Green Light Go was transferred to the barn of Hall of Fame trainer Jerry Hollendorfer to run the first part of his 2021 season at Oaklawn Park. Green Light Go won 1-of-4 starts for Hollendorfer before moving to Woodbine and making his lone start for trainer Michael Doyle, finishing off the board in the Vigil (G3) in August.

Now back in Jerkens’ barn at Belmont, Green Light Go appears to be the same horse he was before the move.

“He hasn’t changed a whole lot since he was two,” Jerkens said. “He doesn’t quite look the same as then because he’s gotten more races into him, but that’s OK.”

Competing off a nearly four-month layoff in the Fall Highweight in his return race for Jerkens, Green Light Go made up ground late from off the pace under strong urging from Dylan Davis, losing by a head to Hopeful Treasure in a final time of 1:11.19.

Jerkens believes that despite the flying finish, a mile still may not be the perfect distance for Green Light Go.

“It’s not always the case that they want more ground,” Jerkens said. “He did win going a mile at Oaklawn, but just because they’re closing in a sprint doesn’t mean they want to go further. Seven furlongs would probably be ideal for him. He’s done good and has a lot of good works in between (the last race and this one).”

In his final drill for his start on Thursday, Green Light Go posted a bullet five furlongs Tuesday in 1:01 flat over Belmont’s dirt training track. Though listed as fast, Jerkens noted the track had taken some precipitation the night before.

“He worked really good on a pretty slow track,” Jerkens said. “He went by himself and did well.”

Along with Green Light Go, Jerkens will also send out The Sound in race 8 on Thursday in his first start since transferring from the barn of trainer Brad Cox.

Also a 5-year-old son of Hard Spun, The Sound won 3 of 7 starts for Cox, was last seen finishing a well-beaten sixth in an optional claimer at Churchill Downs in April. The Sound was transferred to Jerkens’ care when owner Shortleaf Stable decided to keep the horse in New York for the winter.

“They didn’t want to take him to Oaklawn even though he won there,” Jerkens said. “He was already here for a race that didn’t fill and Brad didn’t want to leave any horses here for the winter. I’ve had a couple of Shortleaf horses anyways, so they left him with me.”

The Sound has a mile win at the Big A under his belt, earning a career-best 104 Beyer Speed Figure for his 4 3/4-length optional claiming victory in November 2020, according to Daily Racing Form. Jerkens said he has yet to see that kind of speed in the mornings from the dark bay, who most recently breezed five furlongs in 1:02.90 over Belmont’s training track.

“He hasn’t really been showing anything like that in his works,” Jerkens said. “Maybe he’s just gotten wiser in his old age, but he hasn’t really given us what we want to see in the mornings. Some horses do that when they get older. When you get them over (to the races), and they pop out of the gate, it can be a different story. I hope that’s the case.”

The Sound’s start Thursday may prove to be a tune-up race after being away from the races for nearly eight months.

“I always thought he was the kind of horse who would run good right from the get-go, but I don’t know him very well, and he’s turned out to be a different horse than I thought he was,” Jerkens said. “I thought he was a real eager work horse but he’s not, so we’ll have to run him and see.”

Chiefswood Stables’ Gotham (G3) winner Weyburn is currently stabled at Palm Meadows Training Center in Florida and is gearing up for his 4-year-old campaign after his sophomore season ended in September with an eighth in the Grade 1 Pennsylvania Derby at Parx Racing. The dark bay Ontario-bred son of Pioneerof the Nile most recently breezed five furlongs over the grass in 1:03.45.

“They worked him on the turf down there and weren’t really thrilled with it,” Jerkens said. “We’re backing off him a little bit and regrouping.”