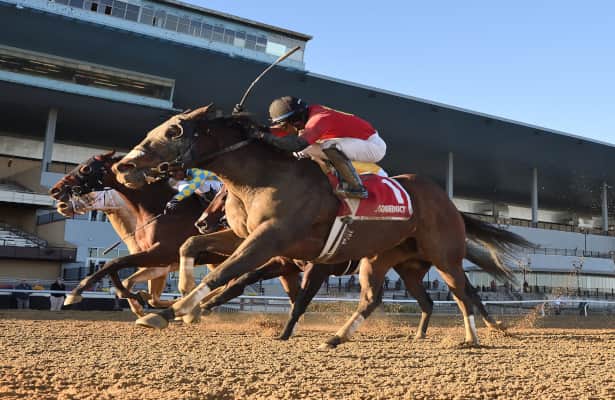 The 8-year-old Greeley and Ben made the grade in his 39th career start, staving off the late charge of Runninsonofagun to post a narrow neck score in Saturday’s Grade 3, $175,000 Fall Highweight at Aqueduct.

Greeley and Ben, ridden by Manny Franco and carrying 130 pounds, was making his first start for trainer Faith Wilson, who notched her first career win in May 2021 at Monmouth Park, and provided the conditioner with her first graded score.

“I wish my kids (Chelsea and Christian) were here for this, but it’s a far drive from New Jersey every day that me and my husband (Carlos Cortez) take,” Wilson said.

Greeley and Ben, owned by Darryl E. Abramowitz, turned the tables on Runninsonofagun in the Fall Highweight, a six-furlong sprint for 3-year-olds and upward, after finishing fourth to his familiar foe in the six-furlong Bold Ruler (G3) here in October. The Greeley’s Conquest gelding exited that effort to capture a six-furlong allowance tilt here on Nov. 10.

“We loved him since he came to the barn and he’s just been getting better and better,” Wilson said. “The starter allowance was supposed to be a confidence booster for him last time. Since then, he’s been wild in his training so he was proud of himself since that last win going into here. We were pretty impressed with how he was doing.”

Bezos set the tempo in the Fall Highweight, surging to the lead through splits of 22.90 seconds and 46.67 over the fast main track with Jaxon Traveler tracking along the rail in second. Greely and Ben advanced from third position through the turn, cutting the corner into the stretch run to duel for the lead with Jaxon Traveler as Factor It In, a close third in the Bold Ruler, and Runninsonofagun took aim.

All four rivals were in with a shout in the final 70 yards but a game and determined Greeley and Ben stuck his neck out to prevail in a final time of 1:11.95. Runninsonofagun completed the exacta by a head over Factor It In with Jaxon Traveler another head back in fourth. Synthesis, Happy Farm and Bezos rounded out the order of finish.

Franco, who won the Notebook here Friday with Acoustic Ave, said he wanted a prominent trip.

“My main thing was I wanted to get him to break well and stay close,” Franco said. “I just hugged the rail the whole way around. In the stretch, the horse on the lead opened up the rail and my horse just went through and did the rest. He fought hard.”

Kendrick Carmouche, aboard the mutuel favorite Runninsonofagun, said he was proud of the effort from the John Toscano, Jr. trainee, who shared co-highweight honors of 132 pounds with Factor It In.

“My horse ran so good. It would be different if he could have leveled off and opened up on them, but he brings you there so easy thinking you’ve got so much horse,” Carmouche said. “But overall, the horse gave his best effort. I had him in the right place to win and the owners and the trainer would have liked to have won this one before we put him away for the season and start him over next year.”

The Fall Highweight was just the third graded attempt for Greeley and Ben, who was a close-up third in last year’s Whitmore (G3) at Oaklawn Park for his then conditioner Karl Broberg. The well-traveled gelding moved barns several times since that effort before being claimed for $40,000 by trainer Jeffrey Englehart from a winning effort in September at Saratoga.