Greatest Honour has ankle trouble, is out of Kentucky Derby 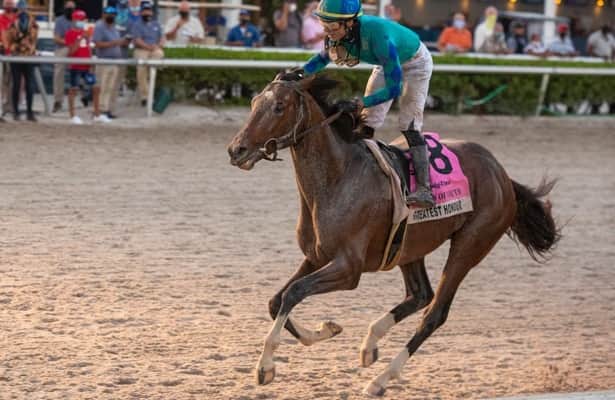 Coming off a third-place finish in the Grade 1 Florida Derby last month, Greatest Honour has been taken out of consideration for next month’s Kentucky Derby.

Trainer Shug McGaughey told Horse Racing Nation that ankle trouble led to his decision to send the Tapit colt on a 60-day break, with 30 days in the field and 30 days under tack.

McGaughey said Greatest Honour was dealing with stress remodeling, which is described as an exercise-induced condition that may alter the structure of a bone.

“It’s not anything we’ve got to operate on,” McGaughey said. “He just needs a little bit of time. He’s a little banged up, and we’ll give him that. Hopefully we’ll come back, and maybe we’ll have him for Saratoga.”

After losing as the favorite in the Florida Derby, the Courtlandt Farms homebred drifted from 8-1 to odds as long as 15-1 in Kentucky Derby futures markets in Nevada.

“Anytime we get a blow like that, we’re disappointed, but I understand the situation,” McGaughey said. “We’re trying to do what’s best for the horse. I’ve always sort of felt my whole career is if you miss this race, there’s another one down the road. Obviously, there’s not another Kentucky Derby, but there’s no way that we would want to do anything to compromise Greatest Honour in any way.”

Since his third-place debut at Saratoga last September, Greatest Honour has raced once a month for a record of 7: 3-1-3. Wins during the winter in the Holy Bull (G3) and Fountain of Youth (G2) made him one of the four shortest-priced horses in Kentucky Derby futures before his loss at Gulfstream Park on March 27.

McGaughey has had eight Kentucky Derby starters, winning with Orb in 2013.