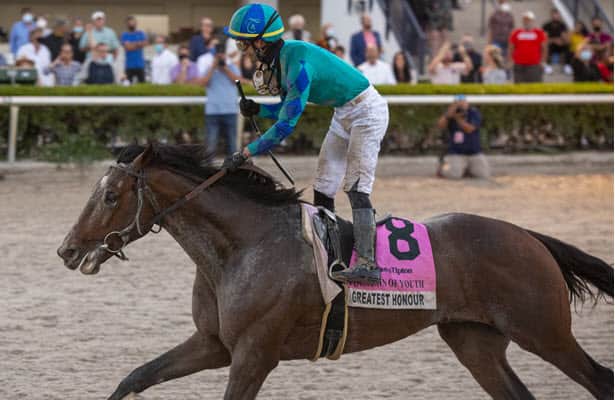 Greatest Honour won last year’s Holy Bull (G3) and Fountain of Youth (G2) before running third as the odds-on favorite in the Florida Derby (G1) in late March. McGaughey subsequently was not satisfied with how the Tapit colt exited the race and announced he was off the Kentucky Derby trail and would receive 60 days off.

The layoff would instead be much longer. Greatest Honour finally returned to the work tab in late January of this year and has been training steadily at Payson Park Training Center.

In the 1 1/16-miles Challenger, Greatest Honour drew post 3 and will have regular rider Jose Ortiz in the irons. They are the 3-1 second choice on the morning line.

Dynamic One, who was 18th in last year’s Kentucky Derby, will be making his first start since checking in seventh in last year’s Travers (G1). He previously won the Curlin Stakes at Saratoga and was second by a head in the Wood Memorial (G2).

Greatest Honour and Dynamic One will face eight others in the Challenger including Hidden Stash, who has raced twice on turf at Tampa Bay Downs this year in his first starts since last year’s Kentucky Derby.