Greatbullsoffire the horse to beat in Maryland Million Nursery 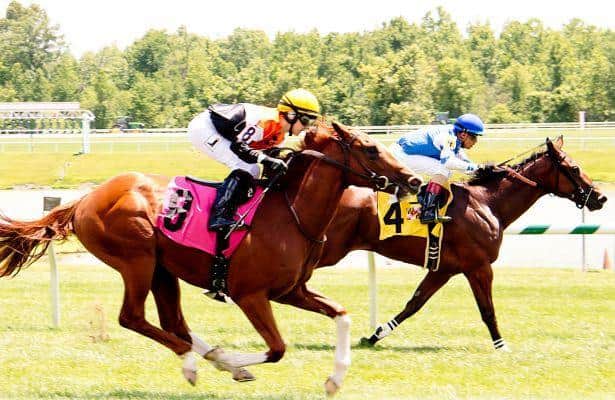 Six weeks after suffering his first career loss in the storied Laurel Futurity, Kathleen Willier’s Greatbullsoffire returns as the horse to beat in Saturday’s $100,000 Maryland Million Nursery at Laurel Park.

The six-furlong Nursery for 2-year-olds by eligible Maryland stallions is one of nine stakes on the 31st annual Jim McKay Maryland Million Day program, including the $100,000 Lassie for 2-year-old fillies.

A bay son of Grade 1 winner Bullsbay, Greatbullsoffire is the 6-5 program favorite for the Nursery where he is the lone stakes winner in the field courtesy of his victory in the Strike Your Colors Aug. 4 at Delaware Park.

“Looking at the PP’s on him, he looks like the horse to beat. Hopefully, he’ll run to everybody’s expectations,” trainer Hamilton Smith said. “They’re not supposed to be easy spots. There’s several colts that can beat him, no doubt about that. We’ll see who gets the best trip. We’ll try our tactics and they’ll try theirs and we’ll see who comes out on top.”

Greatbullsoffire was a neck winner over Caribou Club in his debut July 17 at Laurel going 5 ½ furlongs on turf before pulling away to a 2 ½-length victory in the Strike Your Colors, contested at the same distance on dirt. He went back to the grass for the Laurel Futurity, where he set the pace as the favorite and weakened to third behind Caribou Club and Undulated.

“I think the two horses that beat him in that particular race, they’re going to be nice colts themselves,” Smith said. “We got beat by two legit horses, still I wasn’t pleased with the way he ran. He went out and didn’t carry himself like I thought he should have.”

“He’s coming into the race fine. We weren’t trying to get any speed into him. We were trying to slow him down a little bit,” Smith said. “We just wanted to get him to where he was a little more relaxed in his works instead of him getting speed crazy. I don’t like that in a young horse. We just wanted to get him to relax a little bit in his works; that way he’ll run a better race for us, I think.”

Victor Carrasco, up for each of his two victories, gets the return call from Post 7 at co-highweight of 122 pounds.

Narrow Leaf Farm’s In Arrears looms a major contender in the Nursery off his impressive four-length maiden triumph going 5 ½ furlongs Sept. 30 at Laurel, where he went off as the favorite. He was sent off at 53-1 in his debut 19 days earlier, taking the lead into the stretch before finishing third at six furlongs.

In Arrears’ victory was further flattered when runner-up El Areeb, a $340,000 2-year-old in training purchase in March trained, came back to graduate with an 8 ¾-length romp Oct. 15. Forest Boyce will ride In Arrears from Post 4.

“That horse won pretty impressively, and I think my horse will move forward a little bit off his last race, as well,” Potts said. “The horse came out of his race great. He came back and breezed last Saturday for us and went five furlongs in 1:01. All systems are go. There’s one horse in there I’m overly concerned about which is Hammy Smith’s horse, but overall my horse is legit and hopefully he can give a good account of himself.”

Joining recent Laurel maiden winners Cherokee Spirit and Maryland’s Best in the field are Apolodorodedamasco, Dancing With Maude, Ignotus, Jerandson, Slick Man and Sventastic, along with Maryland-bred also-eligibles O Dionysus and Worth His Salt.

Joan Everett homebred She’s Achance Too, narrowly beaten in her unveiling Sept. 25 at Laurel, makes her stakes debut as part of a full field in the $100,000 Maryland Million Lassie, run at six furlongs on the main track.

A bay Redeemed filly, She’s Achance Too was pressed all the way on the lead into the stretch in her only previous start before giving way late and finishing third by a length. Natural Notion, who also returns in the Lassie, beat her by a nose for second.

“She drew the rail first time out and it was kind of a let’s see how she breaks and go from there. She’s always been very forward in her training,” trainer Jason Egan said. “Now she’s gone the opposite way and drawn outside, so we’ll have a chance to see how things are going. She’s developed well and I think she learned a lot from her first race so we’re hopeful for another good run.”

Country Life Farm’s Friesani will also be making her stakes debut in her second start for trainer Mike Trombetta. She got off slowly and was stuck on a dull inside path going six furlongs Oct. 3 at Parx and wound up fourth. She sheds eight pounds from that race and will carry co-lowweight of 114 in the Lassie.

“She’s good. We got a race under her at Parx to give her some experience,” Trombetta said. “She’s adding blinkers. She’s worked good since that first race, so we’re going to take a shot.”

Favored at 5-2 on the morning line is The Elkstone Group’s Diamond Dollar, a 2-year-old Not For Love filly making her first start away from Presque Isle Downs’ all-weather surface. She won the Mark McDermott Stakes Sept. 4 and most recently was third in the Mrs. Henry D. Paxson Memorial Sept. 18.

Rounding out the field are recent maiden winners Baltimore Miss, Big Blue Arrow, Item and Sommer Something along with Faze the Nation, Friesan Gal and Small Batch. On the also-eligible list are Maryland-breds Phantom Shot, Misty On Pointe and Lucky in Malibu.