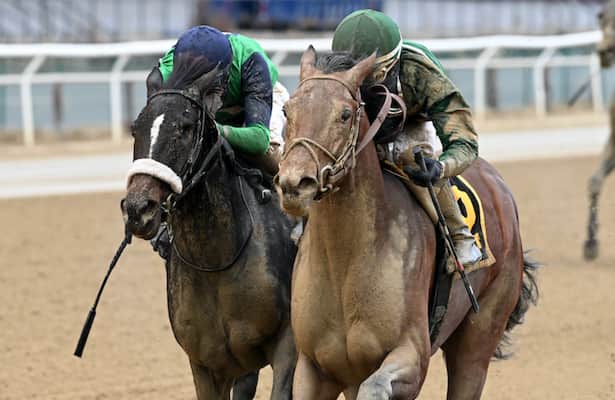 Un Ojo is on track to make his graded stakes debut in the Grade 3, $250,000 Withers on Feb. 5 at Aqueduct Racetrack. The nine-furlong Withers offers 10-4-2-1 qualifying points on the road to the Kentucky Derby to the top-four finishers, respectively.

Trained by Tony Dutrow and owned by Cypress Creek Equine, the son of Laoban had his first work since his game effort in the Great White Way, breezing four furlongs in 49.13 seconds over Belmont Park’s dirt training track on Friday in company with fellow Dutrow trainee Fair Haired Boy, a 5-year-old maiden winner.

“We had plenty of time between races, so we gave him a little bit of a break there immediately after the stakes and we’re extremely happy with him,” Dutrow said. “If things keep going the way they are today, he’ll be in the Withers.”

Un Ojo’s second in the Great White Way was the first stakes placing of his career. He fought valiantly with eventual winner Geno down the stretch to be defeated just a neck despite losing momentum when he was bumped by Geno at the sixteenth pole.

Dutrow said he is not concerned with Un Ojo’s step up to the graded ranks for the first time.

“I think he’ll manage it just fine. We’re feeling very good about the distance and how the race is coming up,” said Dutrow. “His breeding says that the distance shouldn’t be a problem. We are looking forward to it for sure.”

Other horses under consideration for the Withers include the top three finishers of the Jerome – Courvoisier, Smarten Up and Cooke Creek – as well as maiden winner Constitutionlawyer.

Dutrow also worked Buy Land and See on Friday, sending out the 5-year-old son of Cairo Prince to drill a bullet four furlongs in 47.60 over Belmont’s dirt training track, the fastest of 110 works for that distance Friday.

“He’s a talented horse and did it the right way,” Dutrow said. “He didn’t stress himself (in the work), and we’re very happy with him.”

Buy Land and See, a stakes winner on the turf with a gritty neck win in the Awad at Belmont in 2019, made his dirt debut in his last start, finishing third in a one-mile optional claimer at Aqueduct on Dec. 31.

Dutrow said the grey showed enough in his last effort to continue racing on the main track.

“We’ll run him in the same condition as last time. We thought it was a positive effort the last time, and we’ll try it again,” said Dutrow. “The switch was pretty easy for him.”

Out of the Maria’s Mon mare Twiggles, Buy Land and Sea is a half-brother to multiple graded stakes-placed stakes winner Sweet Bye and Bye.