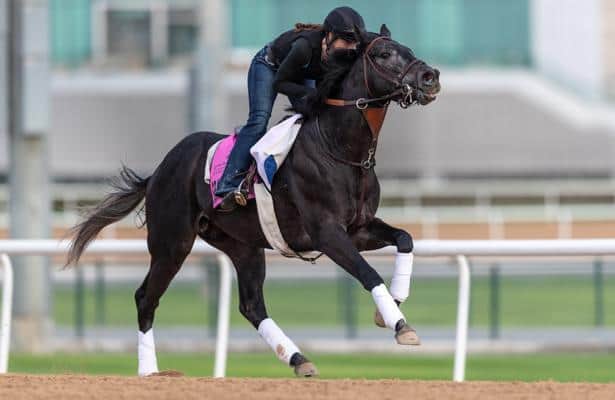 The 3-year-old Gray Magician was nominated for all three opening day graded stakes at Santa Anita Park for which he’s eligible, meaning he could remain in his age group going seven furlongs in the Malibu (G1) or try turf in the Mathis Brothers Mile (G2).

But Aron Wellman, president of Eclipse Thoroughbred Partners, said there’s a “strong lean” toward the Grade 2, $200,00 San Antonio Stakes given what it could mean for the Graydar colt’s future.

“He’s on the way back,” Wellman said, “and we’re hoping to be able to put a race into him opening day so we can put the Pegasus World Cup under consideration as well.”

The Pegasus, newly reduced to $3 million, is an invitational that now costs connections nothing to enter. It’s also a medication-free event set for Jan. 25 at Gulfstream Park.

“I certainly applaud The Stronach Group for trying to make positive strides in that regard,” Wellman said. “Whether now’s the time to ask older horses to come run for their biggest prize sort of cold turkey — they’ve been on medication and Lasix their whole lives, and now they’re being asked to do it without — is kind of precarious.”

“That allows for us to at least consider that path,” Wellman said of the Pegasus.

Dubai was as far flung as Gray Magician traveled this season, but he has spent much of it away from Miller’s southern California base. In addition to winning the Ellis Park Derby in August, he was second in Laurel Park’s Miracle Wood, second in the Indiana Derby (G3) and a runner-up in Parx’s Smarty Jones Stakes (G3).

“Going back to even before Dubai, we had always said we thought he was a horse that was just a cut below the best 3-year-olds,” Wellman said. “That’s why we sort of mapped out a road warrior campaign with him. We were going on money runs.”

Gray Magician has earned a touch more than $844,000, and his effort two back, trading the lead with Spun to Run before winding up a head short in the Smarty Jones, has only looked better with time. Spun to Run since then won the Breeders’ Cup Dirt Mile and finished as the best of the rest in Maximum Security’s Cigar Mile (G1).

Gray Magician took a more conservative approach after the Smarty Jones by annexing a Keeneland allowance event, nudging ahead late to seemingly overcome his issue of hanging in the stretch.

“We hoped would propel him to the Breeders’ Cup or an undercard race,” Wellman said. “That didn’t work out.”

Gray Magician got sick and scratched from the Nov. 2 Twilight Derby (G2) at Santa Anita Park.

“So we’re trying to regroup with him and get him back on the beam,” Wellman said of opening day of the winter/spring season back at Santa Anita. “He’s had an incredible season. He certainly owes us nothing. If he can continue to mature, improve and really put away his competition when he has the opportunity, he can develop into one of the top handicap horses in the country next year.”

*Rating is based on HRN fan votes, which rank the Top Active Horses in training.
Gray Magician San Antonio Stakes